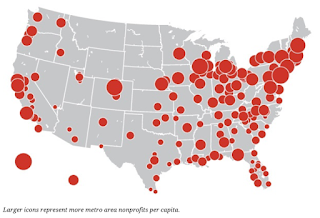 Governing: Where Nonprofits Are Most Prevalent in America - "But not all cities benefit from nonprofits in the same way. Some places have a far more robust nonprofit sector than others." Let's go to the map on the right!

99% Invisible: Invisible Women - One of my favorite podcasts explores how design ignores women.The first illustration relates to the differences in travel patterns of men and women and how that led to changes in how a city in Sweden plows its streets. I kid you not! Listen to or read this immediately.


WaPo: Where all the 2020 presidential candidates have lived — and where none have - "Where we live helps shape who we become, which is why these details are interesting when we’re talking about people who want to lead the country. But does geography help a candidate get elected? We have experts who will tell you, but first, let’s look at where these folks come from." The northeast bias is alive and well says your editor who lives in the land of Bernie and Elizabeth.

Esri: Implementation Guide for GeoMentors is a new Teach with GIS Guide.

Introduction to GIS - The free OER book by Víctor Olaya, a software engineer at OpenGeo, is hosted on GitHub. Via Alexandre Neto. It's short and software agnostic.

OpenGov Asia: Satellite images and GIS to mitigate rising Philippine temperatures - "The Department of Science and Technology (DOST), through the Philippine Council for Industry, Energy, and Emerging Technology Research and Development (PCIEERD), is working with the University of the Philippines-Training Centre for Applied Geodesy and Photogrammetry (UP-TCAGP) to find ways to mitigate the harmful effects of the rising temperatures in urban areas." Wow, those are long acronyms!

Central Maine: Hit the road: State, other groups working to protect central Maine’s wildlife on the highway - An online database and map is part of a three-year program to identify hot spots where animals are getting hit the most and come up with a solution. The Maine Department of Inland Fisheries & Wildlife, Maine Audubon, and University of California-Davis are working on the project. Mapping roadkill has always been popular.

Press Release: Feed Ontario Releases New Study Revealing Hunger Exists in Every Electoral Riding - A new study competed with Fleming College Geographic Information Systems (GIS) revealed hunger and food bank use existed in every electoral riding in Ontario during 2018. Ontario’s food banks were accessed by 507,977 people who visited 3,033,970 times throughout the year – a three percent increase over 2017. Here's the map. Riding? Says Wikipedia: "An electoral district in Canada, also known as a 'constituency' or a 'riding', is a geographical constituency upon which Canada's representative democracy is based."

Robesonian: UNCP, N.C. State expand dual-degree program - "The university signed ... an agreement with N.C. State University to extend their 3-plus-2 engineering program to include pathways to degrees in civil and environmental engineering in partnership with UNCP’s Department of Geology and Geography." I'd not heard much 3+2 news recently; I guess it's still a thing.


Wyoming Public Media: New Map Hopes To Provide More Minute Data On Broadband Coverage - "The Wyoming Business Council and the University of Wyoming GIS department partnered up to create a tool that is more detailed than the federal data collected in the state." The tool is an operations dashboard.

University of Chicago: Interactive map built by UChicago scholar and students sheds new light on riots - Researchers and students built an interactive map that shows deaths, injuries, photos and more from the riots of 100 years ago. The lead researcher is a historical sociologist.

The Virginia Gazette: W&M students are back in town; here's a look at what's new on campus - "The university’s Center for Geospatial Analysis will begin enrolling students in a 15 credit hour geospatial sciences certificate post-baccalaureate program in the fall... The Certificate in Geographic Information Science was funded with seed money from the former provost’s Creative Adaptation Fund. Students who enroll in the program full time can complete it in one year."

The Conversation: Thrash not trash 🤘: why heavy metal is a valid and vital PhD subject - A justification from the Professor of Human Geography, University of Newcastle on his offer for the study of some interesting topics. I noted coverage of the scholarships on a gaming website a few weeks back.

I was surprised to see this ad on the Web. It does not name the school, but when you click, you end up at the University of Denver. Back in 2018 DU was ranked 96 in U.S. News and World Report list of top national universities.

Teachable is an online platform that hosts courses. I ran into two GIS organizations that use it.

GIS Science School is the brainchild of Bissemb Olivier, who calls himself a GIS Expert. He has a degree in electrical engineering and completed the Coursera GIS specialization from UC Davis. The school offer "one off" or subscription access at $16/month to five courses.

BootCamp GIS is a team effort of a half dozen people offering technical and entrepeneur focused courses. Most are offered is one of two forms: "knowledge builder self paced" or for a higher fee "professional builder" which includes access to an instructor and other perks. The website has been around since 2017 and classes are on the schedule for fall and early 2020, but my queries went unanswered as this issue goes to press.