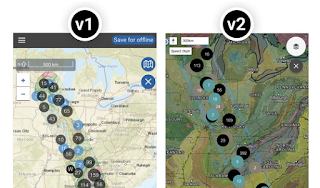 Journal of Maps: Mobile UX design: learning from the Flyover Country mobile app - "In the paper, we note UX design insights that are potentially transferable to other mobile mapping contexts, organizing insights by mobile representation design (scale, projection, symbolization, and typography) versus mobile interaction design (map entry point, bottom navigation, floating action button, and pull-up information panel)." A timely article to introduce UI/UX into a cartography or GIS course.
Kaiser Health News: Geography Is Destiny: Dentists’ Access to Covid Shots Depends on Where They Live - "A handful of states are making dentists a lower priority than other health professionals for inoculations, even though they have their hands in people’s mouths and are exposed to aerosols that spray germs in their faces."
Continue »
Posted by Adena Schutzberg 0 comments
Email ThisBlogThis!Share to TwitterShare to FacebookShare to Pinterest
Labels: covid-19, NC State, UI/UX, weekly

Gizmodo: Parler Users Breached Deep Inside U.S. Capitol Building, GPS Data Shows - "At least several users of the far-right social network Parler appear to be among the horde of rioters that managed to penetrate deep inside the U.S. Capitol building and into areas normally restricted to the public, according to GPS metadata linked to videos posted to the platform the day of the insurrection in Washington."

The Guardian: How a mob of Trump supporters stormed the Capitol – visual guide - Writes Gretchen Peterson on Twitter: "A visual guide to what happened yesterday. The maps are simple and effective. Note they include an overview map, easy to read scale bar, a credit to openstreetmap, and the use of red to both highlight and underscore the seriousness of the matter." Via @PetersonGIS.

GIS Ed Weekly: The Spatially Gifted Are Being Overlooked 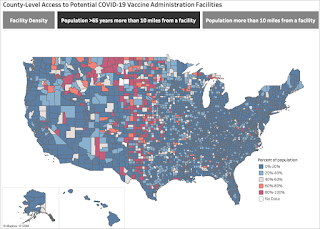 University of Pittsburgh: Some States May Lack Facilities for Administering COVID-19 Vaccine to Residents - "...the researchers found that more than a third (35%) of U.S. counties have two or fewer of these [potential vaccine providing] facilities and nearly 1 in 10 counties have fewer than one facility per 10,000 residents." This interactive map accompanies the white paper.