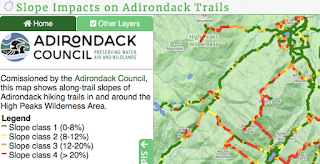 Adirondack Explorer: Analysis finds most High Peaks trails fail design standards - "The Adirondack Council says that an analysis of High Peaks trails it funded has found that more than half of 300 miles of trails studied failed to meet modern design standards." Why? They were built before such standards were developed. You can see the interactive map built from an elevation dataset and a trail map. My trail building experience with the American Hiking Society suggests bringing the trails up to standards will not be easy.

Esri: The Anatomy of a Story An ArcGIS StoryMaps cheat sheet - Hannah Wilber, from Esri's StoryMaps team offers a concise introduction to the features of StoryMaps. Via Allen Carroll. Several colleagues have noted that you can pick up how to use the new StoryMaps in an hour. They also tell me that's the easy part. The hard part is crafting a good story!

TNW: Facebook releases AI-powered tools to map the world- "The company’s tools, called Map with AI, will help the community-based OpenStreetMap organization to create crowd-sourced maps easily." The tool uses AI to identify roads on Maxar imagery; human editors basically "ok" adding the new roads. This sounds like a valuable tool to explore, in or outside of class.

The Morning Call: MAP: Who receives food stamp benefits in Pennsylvania? - I'm not so sure about the color palette. What do you think?

UNC: How Affordable Housing Affects Mental and Physical Health - "Finding affordable housing in Colorado continues to make headlines and cause headaches for those who live in the state; however, a University of Northern Colorado researcher is investigating affordable housing and physical and mental health issues using geographic information system (GIS)-mapping techniques." Bottom line: neighborhoods with rental burden higher than 30% of a household’s annual income show high rates of mental and physical health issues.

Daily Bulldog: UMF student creates GIS tool to help manage municipal storm water - Natalie Thomsen is a University of Maine at Farmington student minoring in geography. She worked at the City of Gardiner’s Department of Public Works where she built the tool. She's also georeferencing some Sanborn maps for the city library.

Post Courier: Database Developer Adds Value to MRA - "The Mineral Resources Authority (MRA) [of Papua New Guinea] recently welcomed back Fiona Kaumu who graduated with a Master’s Degree in Geographical Information Systems (GIS) from the University of Aberdeen, Scotland." She was the recipient of a Chevening Scholarship Award, the UK government’s global scholarship program.