GIS Education Weekly: Just Because You Can Map Something, Should You? 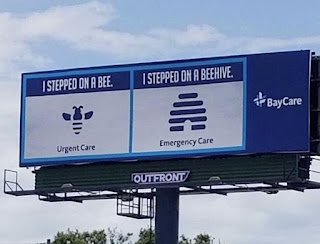 AdForum: BayCare Ad - This is a series of ads (a billboard version is at right) trying to help health care users select the appropriate resource: either urgent care or emergency care. They are very clever. I was thinking about a fun assignment for students. Use that technique to distinguish between:

Alice Jin of Esri Canada offered her take on how to explain GIS in Google Maps vs GIS Maps - What to say at your next Dinner Party on LinkedIn. Jeff Thurston shared an article, The Evolution of GIS In a Changing World saying, "This article attempts to explain the power of GIS in layman terms." Ask students to offer their own insights in 500 words or less.

Kerrang!: University Offer PhD Scholarship in Heavy Metal - "The University of Newcastle, Australia, is offering a PhD scholarship to study the social geography of heavy metal." Other possible topics per the website of the professor: Geographies of Homelessness, Veganism, Unschooling. I saw this last week but wanted to see if it was legit. Newsweek and my local oldies radio station covered it, so I guess it is.

GSA: "The eighth edition of the CLGE Students’ Contest, organized by the Council of European Geodetic Surveyors (CLGE) in partnership with the European GNSS Agency (GSA), is now open for submissions. The deadline for applications is 23:00 on 29 July 2019." Each winner or winning team from Europe can win EUR 1000.

Twitter: This thread started by James Fee is provocative, if nothing else. The starting point: UNIVERSITIES HAVE RUINED GIS. Your mileage may vary.

Forbes: Why Caution Is Needed With Those Hail Pictures in Mexico - " I thought that it would be instructive to provide context and perspective on this event before things get too carried away." Dr. Marshall Shephard, from UGA (who you should follow on Twitter) isn't suggesting the pictures are fakes, but that this sort of precipitation in this location is not that unusual.

Quartz: You can make millions counting cars in parking lots from space - Research suggests that those with access to imagery data about cars in lots can make them money in the stock market. The implication is that some people actually are doing so. Via Brian Timoney. Hmm. You know all those ads for seminars, videos and books on "How to Make Money in Real Estate (or whatever)"? Did you ever wonder why the people offering them were not doing just that, but selling seminars, videos and books instead? Is there perhaps some of that going on here?

Tech Review: Soon, satellites will be able to watch you everywhere all the time - "While GPS data from cell phones is a legitimate privacy threat, you can at least decide to leave your phone at home. It’s harder to hide from a satellite camera." Via Kevin Pomfret. What are and what should be one's expectations of privacy?

CPR: Golden Artist Charlotte Bassin Is Obsessed With Turning The World into a Work of Art - "These are artistic world maps; four feet in length and each made from different materials. One time, she took thousands of tiny bits of paper she cut from magazines and catalogs to create a colorful gradient map. She’s done cross-stitch on burlap, as well as used flowers, recycled wood, river rocks, shells and currency from her travels. There’s the time she placed a rusty old bike chain to outline the continents and shaded in the land with graphite." I like the one made from produce!

Cleveland.com: State mapmaker brings creativity, whimsy to Ohio road maps - "As a layout design artist with the Ohio Department of Transportation since 1989, the 60-year-old Hull has creative control over the map's look and feel, from the graphics to the paper to the fold that's used. "

Press Release: The World Happy Map Launches with Free #MapsOnTheMove - "The campaign, called Maps on the Move, enlists ambassadors to place the free maps on park benches, in waiting rooms, in libraries, etc. before August 15, 2019, and asking finders to tag their map on social media with #mapsonthemove and #happymap." The company behind the effort is providing 1000 free maps; the actual map for kids sells for $20. Will the free maps prevent a summer slide?

CiyLab: We Mapped Every Place Mentioned by the Democratic Candidates - "On a presidential debate stage, place matters. With a slew of candidates jockeying for breakout moments and, in many cases, introducing themselves to a national audience for the first time, regional identifiers are one of the best sorting mechanisms voters get." Is this helpful or just something they did because they could?

University of Arkansas: Sui Named Distinguished Scholar of the Year by CPGIS - "Daniel Sui, distinguished professor of geography and vice chancellor for research and innovation, received the 2019 Distinguished Scholar Award by the International Association of Chinese Professionals in Geographic Information Sciences. The award is given each year for outstanding research contributions to the field of geographic information science." I met him some years ago when working on The Geospatial Revolution.

WIU: WIU GIS Center Director, Students Aid in State Flooding Response - "Center Director Chad Speedy spent 16 days in the Jacksonville and Springfield areas providing GIS support for the state's flood response. He was joined at various points in the trip by WIU students and alumni..." There's more on student work from the McDonough Voice. That's great experience to put on a resume.

The Southern: SIU student updates map systems to reduce response time at Williamson County 911 - "One Southern Illinois University Carbondale student is spending his summer updating GIS data for Williamson County 911, with the goal of increasing the efficiency and effectiveness of local first responders." Luis Prado, a senior from Westmont, Illinois's got a few other geo projects lined up for the summer.

Moapa Valley Progress: 4-H Group Receives Equipment Sponsorship - "The Where Wolves club is a “STEAM team” which focuses on Science, Technology, Engineering, Arts and Mathematics." They got a grant of software and data from Esri. You have to love that club name!
Posted by Adena Schutzberg
Email ThisBlogThis!Share to TwitterShare to FacebookShare to Pinterest
Labels: hail, privacy, universities, weekly
Newer Post Older Post Home