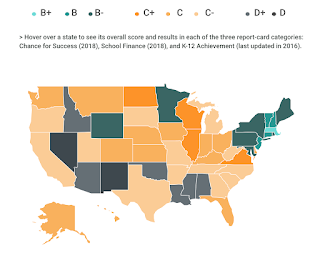 EdWeek: State Grades on K-12 Education: Map and Rankings - National average score is a C. The map needs improvement, too.

e-Literate: Top Hat Marketplace: What is it and should we care? - Phil Hill looks at Top Hat's pivot from classroom response system developer to content company. He includes how Demian Hommel, senior instructor of geography at Oregon State built his geography text. This is the same platform Chris Bone and Amy Lobben used for a text that embeds ArcGIS Online.

e-Literate: College Rankings Revisited: What Might an Artificial Intelligence Think? - Steve Lattanzi shares a less subjective ranking system. Many of the usual suspects appear in the new top 20, but a few others surface including William and Mary and Bucknell.

The News Minute: Many can't place their state on map, don't know how to subtract - Fewer than 42% of youth in India between 14 and 18 could point out the state they lived in on a map. That's per the Annual Status of Education Report.

Press Release: USGIF and RGi Partner to Offer $10,000 Needs-based Scholarship - "USGIF has partnered with Reinventing Geospatial Inc. (RGi), a USGIF Organizational Member, to offer a new award as part of the 2018 USGIF Scholarship Program. The $10,000 RGi Scholarship for Geospatial and Engineering will be awarded to an undergraduate who demonstrates financial need and is interested in or studying both the engineering and geospatial disciplines." The deadline for all scholarship applications is Feb 26.

UNSW: It's Google Maps for buildings: UNSW to launch new research centre - "Leading geospatial scientist Sisi Zlatanova is joining UNSW to head a research centre that will produce 3D digital maps of Sydney's buildings and infrastructure." She comes from the University of Delft.

Cartography M.Sc. is a four semester Master of Science Programme of four universities in Munich, Vienna, Dresden and Twente. It focuses on a broad education in cartography and geoinformatics. Applications are accepted from now until May 31.


To defend the president, the U.S. Secretary of Homeland Security just said under oath that she does not know if Norway is predominantly white.