The UC Davis GIS specialization, hosted on Coursera, includes five courses, two of which are now live. The third course, Geospatial and Environmental Analysis, is expected to launch in the next few weeks. I wrote about the specialization back in January; the first course launched in February.

The first two courses are getting positive reviews. I found this recap of the first course, Fundamentals of GIS, by someone named William. That course gets a high score on Coursera: "4.8 out of 5 of 229 ratings." The second course, GIS Data Formats, Design and Quality, gets the same 4.8 score based on 51 ratings, as I write this.

I contacted Nick Santos, the lead course developer and instructor, to get his perspective on the first few months of the specialization. He explained that "the vast majority of students continue to get access to the courses for free" while "enough students are paying for the courses and specialization" to defray the significant development costs.

The monthly offerings have allowed him to identify "the common questions - both ones because of errors or inadequacies in the materials as well as ones related to language barrier, and diversity of student backgrounds." He's put together an FAQ to address them. Santos is looking forward to completing course development so he can spend more time interacting with the students.

He's already updated both the final assignment and its assessment method for the second course. He's pleased with immediacy and flexibility of teaching via Coursera: "The thing I really like about this platform is that we can constantly make changes, so when I see an issue with the course, I can update the materials and students get the new materials right away."

Subscribe! Get this GIS education update free, via e-mail, every Thursday! Last week's issue had three times the normal readership. Thanks for sharing!

Dover Grammar School for Boys in Kent, UK began using ArcGIS Online in the upper level classes in 2014. A story map provides details, but the bottom line is highlighted in graphics below which illustrate "An upward trend in university geography degrees since using ArcGIS in our school." Thierry Torres presented a talk on the implementation at Esri AC.

The University of Maine School of Computing and Information Science announces a master’s degree program in Spatial Informatics (press release dated May 12). It's an online version of the on-campus degree. I have a request out to the program to detail what makes it unique.

Joseph Kerski's/Esri's course Telling Your Story With Storymaps [sic] is now available for free via Discover Spatial. It has ten modules.

Art Lembo shares details of his upcoming Open Source GIS Course at the University of Maryland.

The University of Wisconsin-Madison's geography program is growing. CBS News explores "mapmaking," and reports that "in just five years, the number of students in the program has doubled, to 160. And in the fall, the university is launching an online masters program for the first time. There are 30 slots; nearly 60 have applied." 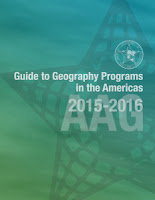 A Twitter conversation between Kyle Massey and @TheAAG revealed that the AAG online map of geography departments is built on the annual Guide to Geography Programs in the Americas (pdf). Further, institutions pay to be included in that guide. Submissions for the next guide, 2015-16 closed last Friday per the announcement for submissions. I contacted Mark Revell, Workforce Development Specialist at the AAG for details on how the data are gathered. "We charge a flat fee of $175 for listings. Although, we do offer a reduced rate of $75 for programs that only offer geography minors/courses, and we allow community colleges to list for free."


.@prezi is undeniably cool [person on Twitter], but it can be terrible too. Simply zooming around doesn’t turn crap into gold.

How did students at the University of Guelph end up looking at the solar potential of houses in Louisville using LiDAR data? "While a professor at Penn State, Kirby Calvert advised a PhD project that used LiDAR data to look at Philadelphia’s solar potential. Now, he’s a geography professor at the University of Guelph, in Ontario, Canada. And Calvert mentioned at this conference that he had some undergraduate students who were looking for a capstone project using real-world data." Curt Bynum, Louisville/Jefferson County Information Consortium (LOJIC) director, heard that and shared the consortium's data with Calvert's students.

Carlsbad Early College High School students in Geology 220 presented their GIS projects last week in what looks like a poster session. "By using the software Arcmap [sic], they were able to produce maps and provide detailed analyses of different topics." One study involved the impact of second hand smoke on children. The article in the local paper talks about the value of becoming GIS certified.

Update: William Gadoury, the Canadian teen whose “lost Mayan city” research made big news recently, won the gold medal in the intermediate category of the Excellence Award from the Canada Wide Science Fair in Montreal last week. His other awards: an entrance scholarship to the University of Western Ontario, the Prize of Excellence in Astronomy of the Royal Astronomical Society of Canada, and the Challenge Award in the Discovery category.

A special feature, Agriculture Schools' Interdisciplinary Approaches Reflect New STEM Opportunities in U.S. News and World Report, covers how STEM, including GPS and GIS are part of a modern agricultural education. Also from the magazine, Map: See the Top High Schools in the Best Places to Live.

CartoDB is now offering a variety of datasets to its Enterprise customers via the new Data Observatory. Here's a list of the sources.

Microsoft is sponsoring the First ACM SIGSPATIAL Student Research Competition. It's open to undergrads and grads who are ACM members.

As part of this past week's UCGIS Symposium, there was a meeting of the GIS&T Body of Knowledge Editorial Board.

NCGE announced its 2016 award winners, which include people and publications (pdf with no links, .DOC with links to winning articles). Of note, Esri's Charlie Fitzpatrick received the highest award for lifetime service to geography education, the George Miller Award.

Joseph Kerski's/Esri's course Telling Your Story With Storymaps [sic] is now available for free via Discover Spatial. It has ten modules.

The official hashtag for the upcoming Esri Education GIS Conference is #EsriEdUC.