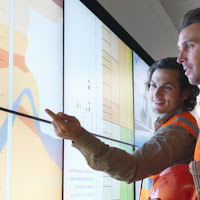 In February the University of California Davis will launch a series of five GIS MOOCs, the Geographic Information Systems (GIS) Specialization, on the Coursera platform. The four "lecture" courses can be taken individually. But if you pay for all of them, along with a capstone project course, and pass all of them, you can earn a specialization in GIS.

The specialization is in partnership with Esri and uses its software. Esri's David DiBiase described the company's participation this way:


At their request, we’re helping UC-Davis to provide no-cost Student licenses of ArcGIS for Desktop.

As of this week Coursera changed its policy about free courses. You can still take courses for free, but for most offerings, the free version will not include grading of assignments or a certificate of completion. For those features you need to pay a fee. Financial aid is available.

Coursera has been moving some of its courses to an "on demand" model. Students can start the course "whenever," but are assigned to a cohort that moves through the material together. I could find nothing from Coursera about how this works, but Nick Santos confirmed this vision. Here's how YaleNews describes it.


The platform responds to two requests Coursera received from global learners. Learners wanted course material to be much more accessible, but they also wanted their learning process to retain some structure. The cohort-based platform creates a new course session every three weeks, complete with automatically generated (soft) deadlines and fresh discussion forums. The hope is that this will allow cohort-based courses to maintain the robust student-to-student interaction of a session-based course, while drastically reducing the time a learner has to wait before accessing course material. 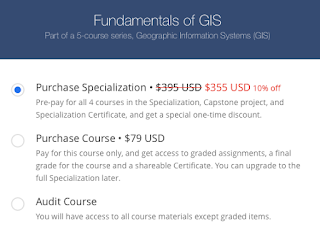 Coursera notes that prices of courses do change. I'm guessing the fees for this new set of courses were still in flux.

I contacted instructor Nick Santos with a few questions about what makes this series of courses different from previous MOOC offerings. He highlighted a few differences:

... the specialization is heavily oriented toward desktop GIS, which I think is a strength since there are tons of materials out there for a motivated web mapper already, and fewer for somebody looking to dig into the analysis side.


What I think makes this specialization pretty unique is that it's going to be available on-demand, so students can join a cohort every few weeks and take the course. The other GIS courses I've seen online are offered only occasionally (or once), where this will be offered continuously, but in a structure that allows students to still have peers to ask questions of. I think with that kind of structure we have the opportunity to reach a lot more students since there will be time for word of mouth to spread and for people to join in when they are available.


For this specialization, I'm working closely with UC Davis Extension, the continuing and professional education division of UC Davis, and we're a team of people who get that we're not teaching your typical college students. Extension courses significantly emphasizes relevance to working professionals and in doing so, has over 60,000 annual enrollments for in-person and online courses in all 50 states and more than 100 countries. So, we go into this project not just with my classroom experience teaching professionals, but with their significant combined instructional design and online course development experience.


... with tens of thousands of learners in a course, we can get tons of feedback, and when we see something that's not working - the students aren't watching it, they're not getting the material on the quizzes, or they're even exiting the class - we can quickly redo it and replace it. This is great because while online courses remove some of that opportunity to clarify with students in person when they have trouble, it adds other tools like the class forum to replace it, and allows us to get it right the next time around.

I also asked Santos about the most difficult part of putting together the specialization.


... developing concise, accurate, and relevant content and recording it ahead of time. In class, I can prepare ahead of time, and if I misspeak or don't explain something clearly enough, students can raise their hand and ask for clarity, and we can try explaining it a new way, or help them solve a problem on their computer. Here, we're going to have thousands of people who mostly just have one source of information and who use each other for explanations when they don't understand. I think it's a really powerful model, but definitely one that requires some adaptation and a lot more preparation.

Get your weekly GIS education update free, via e-mail every Thursday.

U.S. K-12 School Bandwidth and How Much it Costs

...EducationSuperHighway has released a beta version of Compare and Connect K-12 (CCK12), a tool that allows 13,500 school districts to compare prices, providers and speeds of Internet access.

I see Mapbox and Leaflet in the code. Via EdSurge.

As virtual reality heats up, its use in education continues to be explored. The latest from Google:

Next up, Google has released a beta version of the Google Expeditions app for selected schools and educators that sign up to participate. Participants will download the app to Android phones and tablets to engage with it in class and offer feedback.

Now, in addition to CartoDB's own lessons in its Academy, members of the community can share lessons. There are three currently available; one is from Stace Maples at Stanford. There are details on how to submit your own lessons, too.

Here are the notes from last week's CartoDB webinar focused on education and research. The video will be available next week; I'll be sure to include a link in next week's issue.

Holman offers this year's list of what he considers the top GIS masters degree programs. YMMV

Microsoft made the announcement last week in conjunction with the BETT UK education event.  Microsoft bought the "school-ready remix of the original smash hit game Minecraft" from a company called TeacherGaming. Here's the FAQ. I hope this will only mean more Minecraft use in schools for geographic purposes! 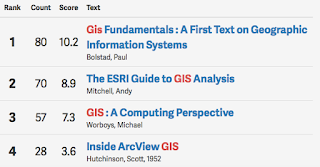 Want to know what texts are being taught? Try the Open Syllabus Explorer which I read about at Open Culture via Tim O'Reilly (@timoreilly).

Alas, geography is not broken out as a field available to search the 100,000+ syllabi in the database. But if you search "geography" you find some familiar names: Strahler, Strabo and one of my Penn State classmates, Don Mitchell. For "GIS" I see Mitchell (Andy), DeMers and Brewer.

Career Challenges for Canadian Students and Recent Graduates in GIS

A 2013 graduate in Canada, Dianne Gray, takes schools and others to task for not preparing students for the geospatial workforce.

David DiBiase and Angie Lee compiled input from those on the HigherED-L e-mail list about AGOL credit budgeting and shared them with Paul Ross, the ArcGIS Online product manager. His response:


Great feedback that we will certainly add to what we consider for upcoming releases  particularly about credit budgeting, while it's been popular we have not heard much about making it better.

Michael Gould (@0mgould) of Esri reports that more than 20,000 people have registered for the DIY Geo Apps MOOC which begins next week.

He also notes who's at this week's GeoDesign Summit:


The Comptroller’s Offices of Research and Education Accountability (OREA) has created two new interactive maps featuring a wide range of education data at the school and school district levels.

That's per a local paper. The two maps are part of a series of maps titled Mapping Tennessee Education. They are all built on ArcGIS.
Posted by Adena Schutzberg
Email ThisBlogThis!Share to TwitterShare to FacebookShare to Pinterest
Labels: cartodb, mooc, ucdavis, VR, weekly
Newer Post Older Post Home