Spatial at the NSF STEM for ALL Video Showcase

The University of Redlands wants you to vote for its Spatial STEM+C video voting page so it can win a Public Choice Award in the NSF 2016 STEM for ALL Video Showcase. "Spatial STEM+C is an exploratory integration project that is introducing K-5 students to spatial thinking as a way of improving computational thinking and mathematical performance. This video will provide a glimpse into the process of developing and pilot testing curricular activities for the project." Last year the GRACE program won a Public Choice Award.

Subscribe! Get this GIS education update free, via e-mail, every Thursday!


The University of West Florida Intro to GIS MOOC runs May 16th - June 25th. More than 750 students are already enrolled. "This course is for people who know very little or nothing about GIS and ESRI [sic] ArcGIS software."

Betsy Mason and Greg Miller, who co-wrote the Map Lab blog at Wired magazine, now have a blog at National Geographic called All Over the Map.

This week, May 16-20, is Women in IT week. Some of the women at Safe Software offer "a discussion of careers in the tech industry, the appeal of programming, and what it’s like being a female software engineer."

David Bouwman, well respected programmer at Esri, shared slides from a presentation at GeoAmateurs earlier this week titled: "How Much Coding Do I Need to Know Anyway?" (Dropbox) It's a nice reminder that code is written to solve problems. h/t @briantimoney See also: similar vision from Stace Maples.


Tripp Corbin is running the GIS Certification 2016 Survey. He's looking for opinions on certification. Results will be shared at GIS Pro in Toronto this fall.

A UK team (most at University of Exeter) offers A Grassroots Remote Sensing Toolkit Using Live Coding, Smartphones, Kites and Lightweight Drones. The "manuscript describes the development of an android-based smartphone application for capturing aerial photographs and spatial metadata automatically, for use in grassroots mapping applications. The aim of the project was to exploit the plethora of on-board sensors within modern smartphones (accelerometer, GPS, compass, camera) to generate ready-to-use spatial data from lightweight aerial platforms such as drones or kites."

Diana Sinton discusses Sea Hero Quest, a game to aid in spatial cognition tasks, at her blog. What's the game for? "They [researchers] aim to test this on patients with dementia and assess its effectiveness as a diagnostic tool."

The folks from New Maps Plus (@NewMapsPlus) at the University of Kentucky share a chapter titled Using Geotagged Digital Social Media Data in Geographic Research from an upcoming book, Key Methods in Geography. 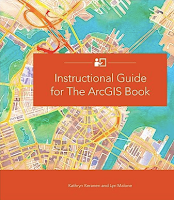 Esri pre-announced the Instructional Guide for the ArcGIS Book on LinkedIn (but nowhere else I can find). It's a companion to the free online The ArcGIS Book: 10 Big Ideas About Applying Geography to Your World, released at last year's User Conference. "The Instructional Guide follows the same organizational structure as its companion volume, and incorporates all the same big ideas, but it gives teachers and students, alike, all the tips and tricks about how to get into the software quickly and jump right in to using the very latest-breaking, up-to-the moment releases and products to solve problems." The Instructional Guide is available for pre-order from Esri and retailers in both print and ebook formats. The ebook version will be available for download in mid-June, and pre-ordered print books will ship in late June. Do note that free (print) copies‬ will be given 2016 ‪Esri Education GIS Conference attendees!

The Executive Director of the AAG, Doug Richardson, writing in ArcNews, details how geography fared in the now passed U.S. law, Every Student Succeeds Act (ESSA).


Riverside Research, a not-for-profit company that serves the Department of Defense and the Intelligence Community, teamed with the United States Geospatial Intelligence Foundation (USGIF) to create the Ken Miller Scholarship for Advanced Remote Sensing Applications. The $10,000 scholarship will be given to students who plan to enter the intelligence workforce. Riverside Research and USGIF plan to award one $10,000 scholarship each academic year, for the three years, starting this year.

USGIF officially launched its Universal GEOINT Certification Program this week at the GEOINT 2016 Symposium. The program, open to anyone in the field, includes three exams with corresponding certifications: GIS and Analysis Tools (CGP-G); Remote Sensing and Imagery Analysis (CGP-R); and Geospatial Data Management (CGP-D). A fourth competency—data visualization—is incorporated throughout all of the exams. Practitioners who earn and maintain all three USGIF certifications simultaneously can apply for the overarching Universal GEOINT Professional (UGP) designation. During the pilot testing phase six Universal GEOINT Professionals were minted:: Talbot Brooks, Stewart Bruce, Chris Johnson, Angel Martinez, Christopher Stahl, and Michael Wood. There are now 26 individuals with the CGP-G certification, 37 with the CGP-R, and 28 with CGP-G.

Janaya Crevier, a Fulbright Scholar from Calvin College (MI) will be doing her research in Austria. She'll visit "to explore the journeys of a half dozen refugee families. She’ll then build a story map about their geographical journeys from origin to destination with the hope of having it published on a magazine’s website that is produced by and for people of migrant/diverse backgrounds. The goal of her project is to deepen geographical understanding of cross-cultural injustice, as well as of cross-cultural hospitality and reconciliation."