What happened in GIS while you were away...

Most of us have been on vacation since about December 23. Here's some of what happened while you were away. 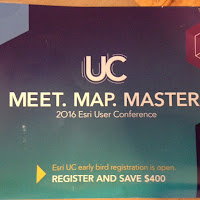 A physical mailer for the 2016 Esri Usr Conference appeared at the end of December with MEET.MAP.MASTER. on the front. I tried it in the What3Words tool and it's not a place. The mailer included a number-filled infographic with data to convince the recipient to attend the event. My favorite factoid:

76% of attendees gain an understanding of what others in there are doing.

GeoHipster and GeoAwesomeness are sponsored by Mapbox. The former has patrons. The latter is also sponsored by GIS Cloud and Maptionnaire. I'd never heard of Maptionnaire, but it focuses on tech for collecting crowdsourced geolocated information and is based in Finland. (The is probably old news, but I just noticed it.)

The magazine solicited nominations during 2015 and announced those selected via tweet the day after Christmas. Here's a press release published on January 1.

The the final 40, plus an extra 40, plus a few groups, a few people under 20 and some honorable mentions are listed online; only the "real" 40 are in the print version. I'd heard of just three of the forty.

I'm curious how this list might be used. Will hardcopy or online readers tackle each profile? What might they hope to learn from the bios? Will they look to connect with these up-and-coming leaders? Will they try to poach them for jobs?

The article on VentureBeat by the CTO of Grindr appeared on December 26. I expected to read a sponsored post by one of the bigger "traditional" geospatial companies and was pleased to see it was something else.

The return of the open LiDAR format debate

A post from Martin Isenburg on December 19 rekindled the topic. He summarizes the gist in a tweet: "@Esri escalates #LiDAR war despite @opengeospatial @OSGeo mediation"

The post explains that Esri stopped promoting its proprietary solution and added a new option to its software product's menu to convert from the open LAZ format to its proprietary format zLAS. Discussions on an OSGeo list have pointed to both the OSGeo and OGC codes of conduct to manage interactions as individuals raise concerns.

I don't think I saw any promoted Esri Tweets (aka Twitter advertising) before December, but I saw a few in recent weeks. One was for the upcoming MOOC and this one was geared toward #NRF16, aka, the National Retail Federation event coming up in the middle of January.

It seems to be doing quite well with many "likes."