Where in the World?

To celebrate the 20th anniversary of its first airing People Magazine shares 10 Reasons Where in the World Is Carmen Sandiego? Was the Best Educational TV Show Ever. Yes, I was a fan and became a bigger fan of Rockapella as the years passed.

This discussion of seven public places in American that were renamed to be more "hospitable" in 2015 is an interesting topic for students.


Happy New Year! AAG has a new DBA (doing business as): American Association of Geographers. We'll be updating the name in coming weeks.

Geo folks should be sure to tell their copyeditors about the change!

CartoDB offers a webinar on the use of its platform in research and education on January 21: CartoDB, a powerful education & research tool.

In this webinar explore the many ways CartoDB is used by universities and research centers as a resource for seamless data manipulation and free web hosting. Extract valuable insights from big data that will leave a lasting impression on teachers and students. 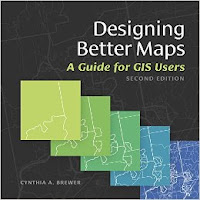 Esri has published a new edition of Cynthia A. Brewer's Designing Better Maps: A Guide for GIS Users. Details are in this press release from Dec 29. When I looked earlier this week Amazon had it as the #1 new release in cartography. Well-known cartographer Gretchen Peterson has a review.
How to Hire

Henry Ward is the CEO of eShares. He wrote what I think is a great post on hiring that's applicable to our industry. I dare those pursuing GIS positions to build resumes/portfolios that show these traits and characteristics.

Maps of the World (@Mapsofworld) called me out on twitter to share this map of the poorest countries of the world by gross domestic product per capita. I think it's a great candidate for cartography students to explore.

The school board in Cabell County, WV is considering career concentrations for its high schoolers. Among the choices:

Also noteworthy is the proposal of a GIS course for Huntington High School. I wonder which concentrations would include GIS? It's unclear where support for GIS came from, but the county is home to Marshall University, which has a GIS program.

Forget Drones Getting into Places they Shouldn't; Watch the Balloons

Security police at the Y-12 nuclear weapons plant at Oak Ridge National Laboratory confiscated what was described as a “weather balloon” this past Sunday. National Nuclear Security Administration spokesman Steven Wyatt described it as likely part of a “geospatial balloon challenge” that originated in Middle Tennessee.

New President of Blackboard has GIS in his Blood

I've never heard of him, but Ballhaus' background includes stints at  BAE Systems, Boeing, Hughes and the USGIF board.

State of GIS Education in the Newspaper


Social studies teacher Mary Mietlicki said teaching map skills could be tedious for young learners, but bringing in a guest speaker such as Makar [of the Buffalo, NY Water Authority] brings the concepts and skills to life.

The article, which I believe is about a GIS Day event, notes how Jack Dangermond and Ralph Nader support GIS awareness. The paper includes a Google Map with the location of the story, as I believe it does for all stories.

Eleven seniors, almost all of whom are pursuing a geography or geology major at the University of Wisconsin-Whitewater, created an Erosion Vulnerability Assessment for Agricultural Lands (EVAAL) model as part of their coursework last semester. They created a map of the 91-mile long watershed, with a gradient scale applied to it indicating where the land was at high-risk for erosion and presented the findings to the Upper Sugar River Watershed Association,

Fighting for Geography in Scotland

According to Royal Scottish Geographical Society (RSGS) Chief Executive Mike Robinson, geography is “starting to struggle” in the classroom. In short, schools are choosing not to offer it above the elementary level. Via: Andy Pope of Esri UK (‏@GIS4HE)

There's a nice introduction to the expanded Data Lab at Tufts University on the school website.

The design of the instructional computing classroom and research workspaces in the lab fosters GIS collaboration and innovation across Tufts campuses and departments.

British Columbia Institute of Technology has a survey out exploring the possibility of an online certificate. I wonder if that market isn't a bit saturated? Via LinkedIn.


This Advanced Certificate could meet the ongoing educational credits required by professionals in various government and private sector organizations. It would allow you to broaden their existing skill set and make use of newer mapping technologies. The proposed Certificate would be taken through online courses so would be available to anyone anywhere.