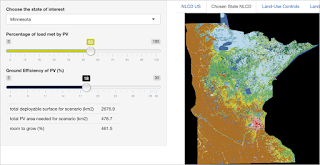 PV Magazine: Every state has room for solar to grow, researchers say - A map produced by researchers at the University of Albany offers a state-by-state analysis of energy needs and usable land for deployment.

CNN: One month later: These maps show how quickly Covid engulfed the US again - "More than 98% of US residents now live in an area where there is a 'high' or 'substantial' risk of Covid-19 community transmission, up from 19% of residents only a month ago."

Insider: This striking US Census map shows how much rural America has shrunk in the last decade - "Massive swaths of Middle America have seen a decrease in population growth since 2010, according to results from the 2020 Census."

On and off Campus

APSU: APSU GIS Center joins the Southeastern Grasslands Initiative to examine land grant data from the Revolutionary War - "To revive the 230-year-old lost world of Middle Tennessee, the two organizations are studying the original, hand-drawn maps and notes surveyors made of the region between 1789 and 1804."

Miami: Geography, economic level affect adaptation to extreme heat - "Doctoral student Lynée Turek-Hankins is the lead author of a study that examines how different regions around the world respond and adapt to a warming climate."

Cleveland.com: High-school students win gerrymandering award for designing Ohio congressional map with Democrat majority - "A proposal developed by New York high school students shows what a Democratic-majority congressional map in Ohio would look like. The map won a gerrymandering award from Princeton University." The students are from an AP Human geography course at Stuyvesant High School.

Colorado College: Professor Sarah Schanz Receives $463,586 Grant to Study Meandering Bedrock Rivers - Colorado College Assistant Professor of Geology Sarah Schanz has been awarded a $463,586 grant from the National Science Foundation. "The three-year project will explore the phenomena of meandering bedrock rivers — those whose banks and bed are solid rock rather than gravel and sand — in order to study how they carve valleys and transport nutrients and sediment." The grant, shared with Indiana University will fund modeling and GIS by Colorado students and the creation of miniature stream tables for K-5 STEM education.

TechCrunch: Felt raised $4.5 million to get you to ‘think in maps’ - "Felt allows users to build a map with data sets integrated into it. A user can open a map of California, for example, and then turn to Felt’s data library to add information about bits like wildfires and smoke patterns. The map’s power grows as more integrations are used to build out its background; using the prior anecdote, for example, the wildfire map integrated with census data could allow decision makers to see how many businesses could be impacted by incoming smoke."

Esri: The 2021 Esri User Conference resources are now accessible to anyone with an ArcGIS public account. Visit the Esri User Conference page and click “Access UC 2021” button on the top right of the page. Once signed in, visitors can explore and view session recordings, Expo content, the virtual Map Gallery, and more. Those over 18 can create a free ArcGIS public account at the Create an ArcGIS Public Account page.

Esri Blog:  What's new in ArcGIS QuickCapture (August 2021) - "ArcGIS QuickCapture is Esri’s rapid data collection mobile app. Use QuickCapture to give field users the simplest and most effective user experience for documenting field observations. QuickCapture is as simple to use as the camera app in your phone, but much more powerful, allowing you to collect the location of events in the field and automatically enrich your observations with multiple attributes. With a single tap in your phone you will be able to record the what, the where and the when; and share that information with the rest of your organization through ArcGIS."