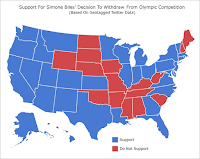 Insider: Map shows which states have the most support for Simone Biles after her withdrawal from Olympic all-around competition - "The team at betonline.ag set out to determine which US states support Biles following her unprecedented decision in Tokyo. Using geotagged Twitter data in the 48 hours following the team all-around competition — when Biles first bowed out — they tracked tweets, hashtags, and direct keyword phrases relating to Biles' choice to sit out."
The Conversation: AI spots shipwrecks from the ocean surface – and even from the air - A doctoral student at UT writes: "I taught a computer how to recognize shipwrecks on the ocean floor from scans taken by aircraft and ships on the surface." Via @vWMaps.
NPR: Climate Change Threatens The Offices Of Facebook, Google. Taxpayers May Be Left Paying To Save Them - This is an interesting interactive that highlights geography and environmental justice.
Technology Review: New global map shows populations are growing faster in flood-prone areas - "Satellite imagery reveals how floods are changing and who’s most at risk."
NBC: Map: See if the CDC recommends indoor mask use in the county where you live - "[As of July 29] Nationwide, 2 out of 3 counties are included in the indoor mask guidance."
NY Times: ‘X’ Marks the Spot: Officials Map a Route Out of the Pandemic - "Governments and organizations around the world are using geospatial data and digital mapping tools to guide their vaccination campaigns." A nice round-up of how GIS is being used by a variety of organizations around the world.
The Daily Star: Young Brits' geography crisis as less than half of Gen Z knows Eiffel Tower is in France - "The UK's young adults urgently need to swot up on their geography knowledge, according to alarming new research carried out by private Covid test company Medicspot." "Alarming"? Data from a Covid testing company?

On and off campus

WXPR: Scientific Team Creates Underground Map to Address Rhinelander PFAS Problems - The UW team is mapping to identify locations where PFAS might be found. Two wells are already offline due to contamination.

Sentinel Source: Keene State students, faculty face aftermath of latest cuts - "Geography is one of six academic programs Keene State is suspending — meaning the college will not enroll any new students in them — following the most recent round of faculty reductions earlier this month, part of the college’s multiyear effort to adjust to a smaller student body and eliminate a $14 million budget deficit.
Technically Philly: Since 2015, Temple’s PSM in GIS has been changing professionals’ career trajectories - "The one-year graduate program trains enrollees of any background in geospatial and data science skills." Note: "This article is sponsored by Temple University and was reviewed before publication."
Esri