GIS Education Weekly: What Industry Can do for Young Professionals 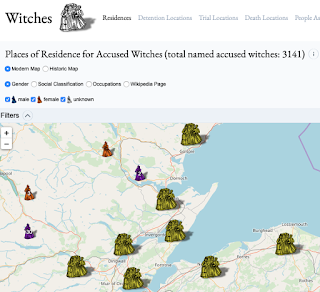 The Scotsman: Map of Scots women accused of witchcraft published for first time - A new map tracks more than 3,000 Scots women who were accused of being witches in the 16th and 17th century. Researchers from the University of Edinburgh built on the Scottish Witchcraft Survey which detailed the persecution of women during the period, with many burned at the stake or drowned. Interesting symbols!

Devex: Should open-source software be the gold standard for nonprofits? - This article, that tells the story of a move from open source to proprietary, is making the rounds. It should prompt some good conversations in classrooms worldwide.

New York Post: Man who created NYC subway map says 'it's a mess,' calls for improvements - "John Tauranac put New York City's subway on the map — literally. The lifelong Upper West Sider, now 80, was the creative director for the MTA’s 1979 rail map, a version of which is still posted in every station today." Now, he says it's ready for an overhaul.

99% Invisible: Dead Cars - Another episode that's got geography all over it! Where do the dead cars go in Bethel, Alaska if it's too costly to move them out of town? I could probably build an entire geography course on 99% Invisible podcasts.

GISCI Geospatial Core Technological Knowledge Exam Unofficial Study Guide - The Google Doc has been updated; the editor and contributors are looking for other participants. Via LinkedIn.

WSYM: LCC's Geospatial Science 2+2 with MSU - This is paid content (on a Fox TV station web page) about the program from Lansing Community College and Michigan State that allows students to complete both an Associate in Applied Science in Geospatial Technologies and a Bachelor of Science in Geographic Information Science within four years.

Knight Center Blog: Learn to do data journalism and visualization using free tools in new trilingual MOOC; Register now -Data Journalism and Visualization with Free Tools is a six-week course offered with support from the Google News Initiative and taught in English, Spanish and Portuguese simultaneously. It will run from Oct. 14 to Nov. 24.

Nature: The ecologist who wants to map everything - Thomas Crowther won the British Ecological Society’s Founder’s Prize. He spoke at the Esri User Conference last year.

WSAZ: West Virginia State University to receive new GPS sports gear - "WVSU will utilize Catapult's GPS-based wearable technology in workouts and competitions this season. The Catapult vests contain lightweight GPS pods that report metric data that measures intensity and changes in heart rate, speed, distance, and load on the athletes to better monitor players' exertion over the course of a workout." Have any geographers looked at this data?

Reddit: How can I Learn GIS for free? - This is perhaps the most common question on the sub-reddit. I'm going to talk about lifelong learning at UW-Milwaukee in a few weeks and will probably start there.

HBR: How the Value of Educational Credentials Is and Isn’t Changing - Do degrees still matter? Yes. Does how people are getting them (online or face to face matter? Not really.


I’m a university student and I really don’t like coming into the lab. Are there any torrent links or free downloads for ArcMap and MapInfo?