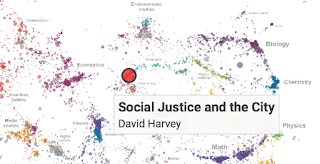 Fast Company: This historic map of 6 million syllabi reveals how college is changing - The most of fun part of this analysis of syllabi is this map of all the academic disciplines by the books assigned by an MIT Media Lab graduate student. I found the "geography" space by just mousing around. I found Yi Fu Tuan's Space and Place and David Harvey's Social Justice and the City and knew I was in the right spot!


NRCGE: NCRGE Funds Research Networks on Geography Education and Libraries, Geospatial Health Education - "One research group, under the direction of Emma Slayton and Jessica Benner (Carnegie Mellon University Libraries), will focus on developing a community to explore the role of libraries and informal education spaces in supporting geography and GIS education." "A second group, to be led by Zan Dodson (AAG), seeks to create and sustain scholarly networks for transformative research in geography education and geospatial methods and technology in health science—especially, focusing on the current limitations scholars face. The RCN, which will be interdisciplinary and international, will be directed and realized through the International Geospatial Health Research Network (IGHRN)." The projects, for those like me who forgot, is "supporting implementation of the Road Map for 21st Century Geography Education project’s landmark report on geography education research."

Reuters: 'Took away our identity': Google Maps puzzles residents with new neighborhood names - "Since Google Maps first launched in 2005 and grew its user base, puzzled and angry residents in cities around the world have increasingly reported finding neighborhoods with incorrect or unfamiliar names, geography and data researchers said." Via @theAAG. Who should create and manage place names worldwide? Should anyone?

GitHub: Intro to spatial analysis in R - By Maude Grenier.  Via Ron Vincent. I noted another one back in March.

Endless Thread: Pile of Crockery - A podcast about Reddit threads follows a story about a photo of a a pile of plates out in the woods. The hosts try to find it, using among other things, GIS. When my local NPR station launched this podcast I thought it was called Endless Threat, so I've never listened to it!

Esri: Trending This Week on ArcGIS Online - Esri product manager Paul Ross shares what's hot this week. Note that the websites and apps listed are referenced in a storymap (aka next generation); you will find two icons at the top right of each app/website referenced: one for "interact with map" and one for "go to website."

LinkedIn: What I learned at Esri UC - Link Elmore reflects on what he learned at the conference. Via Adam Carnow. This is exactly the type of reflections I used to ask  my students to write. Frankly, everyone who attends a conference should write/present this sort of recap.

Boston Magazine: This Map Shows Which Boston Neighborhoods Have the Densest Population - Garrett Dash Nelson, a Dartmouth postdoc, shared his work at CityLab; it was picked up by Boston Magazine. I was interested since at one time my city, Somerville, was among densest in the nation. Not so much now.

WMU: We have lift off: WMU launches UAV certificate programs - "The University began offering two UAV-related graduate certificates in May. One program delves into the geological and environmental sciences applications of these drones. The other covers their geospatial applications, and both programs pave the way for students to become certified as remote sUAS pilots--pilots who remotely operate small unmanned aerial systems."

The Daily Sun (Arizona): NAU and ASU researchers use traffic cameras to map urban flooding- "A team of researchers led by faculty from NAU and Arizona State University, working with several other universities across the country, is collaborating with the cities of Flagstaff and Phoenix in the hopes of turning the basic street infrastructure into a flood monitoring system. The project, called Flood Aware, hopes to take the traffic cameras normally used to detect vehicles at intersections and change the streetlights from red to green and turn them into flood detection machines, said Doerry, one of the researchers on the project." New sensors are popping up all the time!

NC State: A New Way to Help Stop Insect Pests in Their Tracks - Researchers at the Center for Geospatial Analytics at North Carolina State University recently developed a new forecasting technology that can help the USDA and other agencies predict if pests are likely to spread to a new area and where. While the terms spatial data science, artificial intelligence and machine learning were not used, that's what I see underlying this work.

What I'm Thinking About

There's a thread on the Esri Higher Ed list (info here) about moving from teaching ArcMap to ArcGIS Pro. There are comments about how hard it is to update the exercises from one software product to another. (I'll note that it's hard to update to just the next version of ArcGIS Online, too!) The conversation suggests that at least in the Esri space, there are still a lot of very guided exercises, that are product specific. I'll even quote one educator's statement: "We are teaching Pro first, but also introduce ArcMap in the advanced classes so that students have experience in both." That's admirable but when do we turn students loose on software and say, "Go figure it out?" When do they "teach themselves/figure out the tools" and use their understanding of the underlying logic of managing data and spatial analysis to do work? Remember: active learning and learning strategies are key skills for the coming years! See also: Stop Teaching GIS.
Posted by Adena Schutzberg
Email ThisBlogThis!Share to TwitterShare to FacebookShare to Pinterest
Labels: crockery, NRCGE, R, reflection, weekly
Newer Post Older Post Home