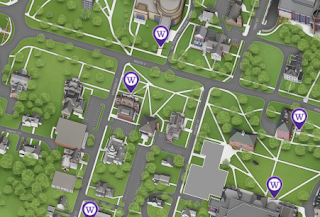 The Edge: Business Briefs - Williams College has a new interactive map showing the college’s sustainability initiatives. A Williams senior and the college sustainability coordinator built it during fall 2018 on platform called Concept 3D. Middlebury has one, too, built on the same platform.

University of Wisconsin: Online MS in Cartography and Geographic Information Systems helps GIS professional map his future - A working professional is taking an online program for a Masters. His employer is paying of some of it and he's looking for a scholarship to pay for the rest.

University of Redlands: New Makerspace Encourages Experiential Learning - Among the goodies in the space is a drone.

KMA Land: NGA partnering with SLU to address issues like poverty - The partnership created a four seminar series on Geospatial 101.

Tico Times: This week in the Peace Corps: Mural project opens doors to explore the World - A volunteer in Costa Rica adds a world map and a country one to an elementary school wall.

Survey123 Tutorial for Planetary Stewards Grants: This video was written and produced by students in Jim Bentley's 5th-grade class. Bentley is an educator in Elk Grove, California and a National Geographic Fellow and Explorer.

Fleming College (Canada): Per instructor Marikka Williams, MSc, GISP,  writing on LinkedIn, "...students, in the GIS Post Diploma Program, begin a special project to: learn about how GIS is being used in Municipalities in Ontario, share their finding with their peers and create a themed map for the municipality they are researching." Among the municipalities participating are Durham, Pickering, Kingston, Barrie and Peterborough.

University of Kentucky: Geography Alum Launches Open Source Pilot Project with Hardin County Water District No. 1 - "Working on a pilot project, [2011 grad Charles] Altendorf is attempting to convert the water district’s data analysis from traditional digital mapping to an open source method." Says Altendorf, "...the potential is limitless once you get out of the original box of figuring out how to put your data in an open source format.” Confused? This dog-eared article discusses open source geospatial software and its relationship to open data, among other things.

Resources and Interesting Articles to Use in Class

Axios: Unemployed and living far away from jobs - "Increasing numbers of experts say the concentration of wealth in big cities, along with the rise of automation, is putting low-wage jobs out of the physical reach of workers."

The Spectator: The search for viewpoint diversity in higher education - The connection between universities, local communities and political parties.

Navigating the Green Book: A modern app built from the original Green Book data enables one to create a U.S. trip using routes and stops from 1937 - 1964. Via @NYPLMaps.

Bloomberg: These Are the World’s Healthiest Countries - An interesting map to explore and try to explain. Via @0mgould.

KRTV: Carroll College Board of Trustees approves major proposed cuts - Among the cuts at the Helena, MT school are five majors and 10 minors, and a GIS certificate.

SocialCops: Introduction to GIS: Manipulating and Mapping Geospatial Data in R - GIS Lounge has the course description in this article. "This course is perfect for anyone who’s comfortable with R and wants to expand their skills, learn some of the latest packages, and start working with one of today’s most common forms of data." The course has six sections and when you confirm you've completed them, you'll be e-mailed a certificate. Who is SocialCops? It's data intelligence company based in New Delhi which offers its own data analysis platform. It has several hundred thousand dollars (not a lot) in startup capital. This course appears to be the second one the company offers. (Hey, another company offering MOOCs! What a great idea!)


2019 Undergraduate Geospatial Technology Skills Competition: Registration for the competition opened Tuesday and closes on March 8, 2019 at 1pm eastern. Students will need to use or create a Gmail account to register, though any software can be used to create the required poster submission.