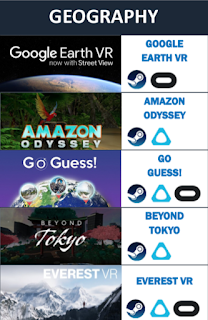 VirtualiTeach: 90 VR Education Apps for Vive, Rift and WMR - The author picked his "top 5" for each category. At right is the geography list.

VR/AR in Schools Webinar: The VR/AR Association Education Committee will present the latest use cases and best practices on how VR/AR is applied in Education in schools on Thursday Feb 21 at noon EST. I know this fellow, Eric Klopfer; he taught one of the MIT MOOCs I took on Ed Tech!

Intro to Physical Geography: Adam Dastrup notes the latest chapter of his textbook is available. The chapter is on "Weathering, Erosion, and Deposition." There is no open license information at this time, so I'm hesitant to refer to the work as OER.

OpenGeofiction: "OpenGeofiction (OGF) is based on the OpenStreetMap software platform, which means that all map editors and other tools suitable for OpenStreetMap can be used to build OGF's fictional world. This world is set in modern times, so it doesn't have orcs or elves, but rather power plants, motorways and housing projects. But also picturesque old towns, beautiful national parks and lonely beaches."

New York Times: The British-Irish Dialect Quiz - My colleagues say it's "spot on." The Times did a U.S. version in 2014 that was very popular.

Tech Enabled Field Studies, ed 2 - Roger Palmer and my colleague Tom Baker offer the second edition of a book aimed at "educators who want to do research with learners –typically classroom teachers working with their students in Earth Systems or Environmental Science, Geography, or History."

World of Drones Education: This organization based in Australia provides some free resources for educators looking to use drones in STEM. VIPS, corporate partners and sponsors seem to fund the venture.

Southern Poverty Law Center: 2018 Hate Map - Speaks for itself. The number of hate groups increased from 2017 to 2018 across the United States.

The Flat Hat (William & Mary): Dawn Wright discusses the importance of female contributions in STEM field - " Throughout her presentation, Wright, a geography and oceanography professor at Oregon State University and chief scientist at ... Esri, explored groundbreaking discoveries related to ocean-mapping and its applications with modern technology in an attempt to relay a message of hope for future innovation and female involvement within the field. " See also this press release from Esri.

Colorado: The new Earth Data Analytics - Foundation Professional Certificate from the University of Colorado, Boulder is a nine credit program offered online or in person over a ten month period from August to June. Applications are currently being accepted for Fall 2019. You can find the entirety of the content covered in the first two courses of the certificate here under a CC license.

GvSIG: Free course about Geographic Information Systems applied to archaeology: Certification and links to the complete course - There are requirements and a fee to get the "certification," which includes a certificate. Please be sure you understand what credential you will receive from this course; it's not clear to me.

"Students should still learn ArcGIS for the workplace, but not being tied to any package, and being comfortable picking up other desktops, command line tools, etc, is a critical skill."

Chronicle of Higher Education: No Textbooks, No Lectures, and No Right Answers. Is This What Higher Education Needs? - My favorite part? The reference to "tough love," a term my team uses in our MOOCs! Via @0mgould.

The Cal GIS student showcase deadline was just extended to February 27th! Via @URISA. No, students do not procrastinate! Never!

Get a Golden Ticket to GEOINT 2019: "This year USGIF is selecting 30 young professionals for the YPG Golden Ticket Program to attend the GEOINT 2019 Symposium, June 2-5, in San Antonio, Texas. The program includes private networking events, luncheons with government and industry seniors, and admission to the chairman’s reception among other opportunities." Travel and lodging are not covered, just registration.

Medium: Watson Studio Desktop is now free for academia - One year renewable subscription is available for students and faculty.

Open Government Student Challenge - The government of Canada wants to know how students at Canadian students are using its open data. The four winners get a trip to Ottawa for a meeting on the topic. It does not state that one must be Canadian, just that you attended a Canadian post secondary school within the last two years for at least a semester. Via @URISA.
Posted by Adena Schutzberg
Email ThisBlogThis!Share to TwitterShare to FacebookShare to Pinterest
Labels: AR, gvsig, USGIF, VR, weekly
Newer Post Older Post Home