Sydney Morning Herald: Where you live is determining your school's NAPLAN score - "In a new analysis, Macquarie University researchers have found that the area in which a student goes to school is one of the clearest predictors of year 5 NAPLAN reading scores, painting a stark picture of Australia's socioeducational divide."

Habitat Seven: The Climate Explorer - Explore graphs and maps of historical and projected climate variables for any county in the contiguous United States. "The Climate Explorer is a web application offering interactive maps and graphs to assist users in decision-making and resilience-building contexts. Built to support the U.S. Climate Resilience Toolkit, the Climate Explorer helps people explore the exposure of human populations and valued assets to climate-related hazards that may put those assets at risk."

Chicago Tribune: Old Navy pledges to replace T-shirt design dubbed 'worst Chicago map ever' - The shirt with the map, which merges many neighborhoods individuals think should stand alone into larger areas, has been available for three years.
The Conversation: GPS makes you worse at navigation, but that's ok - The article is making the rounds; I saw it republished in the Washington Post and Salon this past week. I've reported an error of fact to the author. The fellow's name is Roger, not Robert.

The Guardian: Explore the world: 10 of the best maps for children - The list has a bit of a U.K. bias, but there are some world focused maps, too.

Forbes: It's Location, Location And Location - An economist reports on data suggesting that location should be a key factor in selecting a university if one's goal is employment. The analysis is based on data from CollegeVine. Via LinkedIn.
WSAU: Ambulances show up faster in wealthy US neighborhoods - Another study confirms that geography matters. This one is by a professor of emergency medicine and health policy at the University of California, San Francisco. 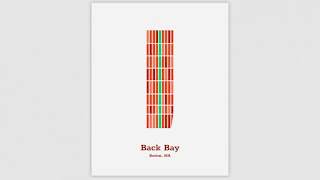 Fast Company: Are you cool enough to get these minimalist maps? - Just some nice maps. Boston's Back Bay is at right.

NY Magazine: Uber Is Headed for a Crash - @re_sieber notes on Twitter that the article " demonstrates over & over that Uber is just a geospatial app." It'd be educational to have students debate that statement and ponder the company's future.

Trajectory Magazine: Leading Holistic Education - The USGIF magazine interviews Dr. May Yuan, the Ashbel Smith Professor of Geospatial Information Sciences in the School of Economic, Political, and Policy Sciences at the University of Texas (UT) at Dallas and a member of the USGIF Academic Committee. Says Yuan: "We shouldn’t focus on teaching students how to use a particular software. We should help students think through spatial problems and know how to develop algorithms and solutions to solve problems. This is quite different from a lot of the current GIS curricula that focus on point-and-click exercises."

James Skidmore: We Have to Stop Teaching - I do not know this faculty member from the University of Waterloo; I was pointed to this piece by one of a few Canadian educators I follow on Twitter. Mr. Skidmore is on board with the "we need to stop teaching how we are teaching" movement.

Kurt Menke reports via Twitter that the fall offering of his Intro to FOSS4G course at Central New Mexico State College is nearly over. Unfortunately, the school can't pay the 20€ fee for each student to receive an official certificate of completion. According to IHE, it awarded the first formal certificates in 2017 to students who took a $1000 short course. The certification page for QGIS lists about a dozen Certifying Organizations that teach QGIS and can provide certificates. This hour plus webcast and this page explains how the certification program works.

WKU: WKU's Geography and Geology departments receive large donation - "Petroleum Experts, Inc. has renewed the equivalent of $2.18 million in MOVE software, which is described as "most complete and comprehensive industry-standard modeling software for tectonics and structural geology." WKU is Western Kentucky University.

Xinhua Net: School children, volunteers make map of Dead Sea with plastic bags in Nepal - I'm not sure I quite see the shape of the Dead Sea, but it's still pretty cool. There's more on the effort from China.org.

Irish Times: A place for geography - Geography has been removed as a core Junior Cycle subject in schools in Ireland. While there's been concern about history being removed, a writer argues for geography.

Harrisburg University: The university's second "GIS developer focused" GeoDev Summit will be on March 4th, 2019. The call for presenters is open through December 14th and registration is now open. The event is free.

Colorado College: CC’s First Geodesign Workshop Explores Community Impact on Creek - "The workshop was developed with Professor of Geology Christine Siddoway and Hrishi Ballal of GeoDesign Hub, and took place from Oct. 22-24." Another  workshop is planned for spring.


AAG Poster Contests: The 2019 Annual Meeting will feature poster competitions offering cash prizes (top award: $500) to winners. Some contests have student categories, some do not. Some require participants to register for the conference, some do not. Some are open to undergraduates, some are not. Some require the use of specific hardware or software, some do not. My advice: read the requirements with care!
Posted by Adena Schutzberg
Email ThisBlogThis!Share to TwitterShare to FacebookShare to Pinterest
Labels: AAG, GPS, naplan, qgis, weekly
Newer Post Older Post Home