Modern Farmer reports on hot careers for students based on interviews at Purdue. GIS is up there as it ties to Soil Science.


Students can focus on soil ecology, chemistry, physics, conservation, and soil landscapes—mapping the soil attributes of a certain area—among other fields of study. John Graveel, an agronomy professor and director of the Natural Resources and Environmental Science program at Purdue, says job prospects for soil scientists right now are very strong. Job opportunities include working for state and federal agencies, environmental consulting firms, and other groups, like the Nature Conservancy.

… because we’re entering an era of data-driven decision making, “the students who can position themselves to be strong from an analytical and problem-solving perspective are going to have an edge in the market.”

“Soil science students are getting some training in geographical information systems [GIS],” Graveel tells Modern Farmer in a phone interview. (GIS is a computer system that is used for collecting and displaying data as it relates to geographic points on the Earth’s surface.) “It’s hugely in demand right now by consulting firms to have people on staff who know how to do GIS.”

The Disturbed Geographer, Thom Kaye, lists the Top 5 things every geospatial professional should know. I'm not sure they'd top my list but he did note they are more geared to GEOINT in a discussion on Reddit.

Afraid you'll miss this important news? Subscribe to receive it via e-mail each Thursday.


USGIF presented scholarships to 24 students as part of its annual Scholarship Program. USGIF awarded $99,000 in scholarship funds this year, bringing the total funds awarded since the program launched in 2004 to $891,000.

I for one would like to see more students from outside of Virginia getting the high school scholarships! I hope USGIF will jump on the back of Esri's ConnectED to get the word out to high school teachers and counselors about its program.

The value of the scorecard is under scrutiny as it's a big data dump rather than an easy to use comparison tool. But, open data are a start!

Edited by Osvaldo Muniz Solari, Ali Demirci, Joop van der Schee "the book presented by the Commission on Geographical Education of the International Geographical Union. It focuses particularly on what has been learned from geospatial projects and research from the past decades of implementing geospatial technologies (GST) in formal and informal education."

LizardTech will explore map projections and reprojection in a webinar (registration) today Thursday, Sept. 17, 2015 at 11:00 a.m. PDT. It's part of "LizardTech University." It was announced just one day before the session.

Hosted by LizardTech product specialist Robert Parker, the webinar will explore map projections and why, how and what it means to reproject. Previous webinars (just two so far) are available on YouTube. 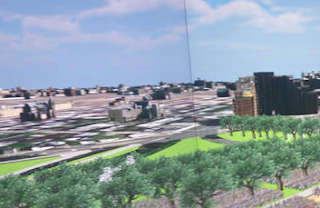 Rowan – which already worked with NASA, NAVSEA, Cooper Ferry Partnerships, Elekta, the Department of Commerce, United Technologies Research Center and others – teamed up with NBC10 to develop an approximate view of what it will look like to be on the Ben Franklin Parkway during the pontiff’s Sept. 27 Mass.

Among the hardware used for the visualization from the south New Jersey university? An Xbox controller, a curved, room-sized screen (the largest of its kind at any American university).

Geo and STEM at NAU


Funded by an $840,000 National Science Foundation grant, faculty at the Center for Science Teaching and Learning at Northern Arizona University will bring together community partners in healthcare, science and education to develop and offer the model bioscience class.

The project involves gathering better data on flu like symptoms. GIS will be used: "geospatial information systems software offered through the GRAIL Lab at NAU."