GIS Ed Weekly: Are maps for machines the future?

Resources for teaching and learning
Washington Post: DeJoy’s USPS slowdown plan will delay the mail. What’s it mean for your Zip code? - The maps are interesting, but so is the impact these changes will have on the U.S. economy, among other topics.

NPR: The Vinland Map, thought to be the oldest map of America, is officially a fake -  Experts from Yale, "who analyzed the map for authenticity found throughout it the presence of a 'titanium compound' that was not used in ink until the 1920s, according to Yale News. Researchers also pointed to an inscription in Latin on the back of the map as evidence that someone intentionally tried to make the map look as genuine as possible."

High Country News: Fat Bears Rule—But Just How Fat Are They?  - "GIS specialist Joel Cusick is pioneering a new technique for calculating the bears’ weight that has broader implications for noninvasive wildlife research."

Visual Capitalist: The 50-Year Evolution of Walt Disney World in Maps - "When Walt Disney World finally opened in 1971, it included the main Magic Kingdom site, as well as two golf courses and two hotels—Contemporary Resort and the Polynesian Village Resort. These areas were all connected by a monorail system." And then it grew! Via my colleague Glenn Letham.

COVID Atlas: How Vaccine Trends Compare Across Community Types - "About 52% of all Americans are fully vaccinated nationwide, but viewed through the lens of the 15 county types in American Communities Project, the vaccination stories in the United States look very different." Via @GeoDaCenter (aka Spatial@UChicago).

The Tyee: This Okanagan College Student Dives Deep into Shark Data, Thanks to an Advanced GIS Program - Sarah Gravel "is using those GIS mapping skills to understand the effects of climate change on sharks, rays and other fishes, along with developing models for population growth rates among those creatures." The article is sponsored content from the college.

NY Post: TikToker goes viral explaining Central Park’s built in GPS system - The numbered metal plates in the park do provide location information. It might be a fun challenge for students to ponder what about the system is like GPS and what is not.

The Daily Northwestern: Geography Prof. John Hudson celebrates 50 years at NU - "As the University’s only geography professor, Hudson single-handedly runs the adjunct geography major. NU incorporated its geography program into the anthropology department in 1987 after the subject fell out of fashion and several geography faculty left NU. After the department closed, Hudson took it upon himself to keep the geography program running. He teaches five lecture courses every year, with topics ranging from 'Chicago and Its Region' to 'Principles of Cartography." I graduated from the University of Chicago in 1986, the same year its geography department was transformed into a committee.

NatGeo Kids: Apparently NatGo and Lysol are working together to offer edutainment. The Lysol provided content is about germs and reads: "Germs are microscopic and tiny, so when you touch hundreds of surfaces each day, your hands can get covered with them. Washing your hands well (and often) for 20 seconds is the best defense against these pesky germs." The activity is basically change detection using photos of people in laboratories with strangely colored liquids. 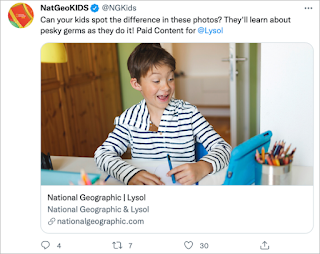 Quote of the week

"Visually appealing maps are nice, but Maps for Machines is where the future lies." - Brian Soliday, CRO at VoxelMaps. Via LinkedIn.

"Maps for Machines" is a pretty common phrase these days. We as educators need to help students understand that more and more of the spatial data we capture and create will be "consumed" by machines. In some cases that will be the end of the line for the data, in other cases, the data will be "re-processed" to be shared with humans. One challenge I'm watching is how the data gets "off the map" and is made as usable as possible for us humans. I'm still waiting for "turn left after McDonalds" instead of "turn left on Route 30 in 500 feet."

CBC: Canadians have 'woken up' to the need for Indigenous education, says creator of popular course - "Tracy Bear led the creation of Indigenous Canada, a 12-lesson Massive Open Online Course, when she was with the University of Alberta. She's now the director of the McMaster Indigenous Research Institute (MIRI) in Hamilton. (McMaster University)."

Esri Blog: It’s in the Wastewater: How UC San Diego Senses and Maps COVID-19 - "When UCSD started monitoring their wastewater via GIS-powered infrastructure maps, they were able to detect viral presence before individuals started showing symptoms, driving early testing and effectively limiting the spread of COVID-19."