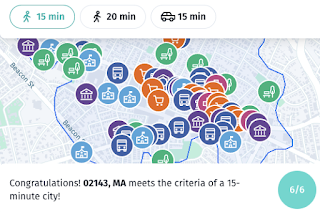 Fast Company: This map tells you if you live in a ’15-minute city’ - The idea of the 15 minute city was discussed earlier this year when the Paris mayor touted the idea as part of a re-election bid. Fast Company tackled it this week with an embedded app from Here meant to identify U.S. cities that meet the criteria.
Wikipedia: Dan Rather - I never knew this: "Rather began his career in Texas, becoming a national name after his reporting saved thousands of lives during Hurricane Carla in September 1961. Rather spontaneously created the first radar weather report by overlaying a transparent map over a radar image of Hurricane Carla. In his first national broadcast, he helped initiate the successful evacuation of 350,000 people." Via reddit/GIS.
WGBH: Innovation Hub: How Social Media is Chaning How Society Works: "The uncoordinated reopening caused chaos, according to Sinan Aral, director of MIT’s Initiative on the Digital Economy. Why? Because Georgia, for example — one of the first states to reopen — pulled in hundreds of thousands of visitors from neighboring states hoping to get a haircut or go bowling. Aral tracked Americans on social media as some states reopened and others didn't, and as people watched their social media feeds fill with images of people heading back outside, he said, they stepped out too — even if their state hadn't yet reopened." We have a new set of pulls and pushes impacting where we go.

PeerJ CompSci: Enhancing discovery in spatial data infrastructures using a search engine - "An article on data discovery by Ben Lewis and Paolo Corti of CGA, and Tom Kralidis of OSGeo, is one of the most viewed GIS articles published" in the journal. It's from 2018.
On and Off Campus
SUNY Cortland: Developing a virtual Adirondack field trip - "An associate professor in the Geography Department and a specialist in an advanced form of computer mapping software called geographic information systems (GIS), Badurek found the visuals and materials necessary to teach a standalone two-and-a-half week virtual summer course that featured ample electronic visuals of the [Adirondack] park’s majestic natural wonders, both new and recreated from past fieldwork data and images captured during the previous summers."
Georgia State: Geosciences Researchers Study Whether Beaver Dams Can Improve Urban Streams And Wetlands - Urban hydrologists Sarah Ledford and Luke Pangle, assistant professors at Georgia State University’s Department of Geosciences, hope to find out if beavers help or hurt urban environments. A key part of the NSF funded study: GIS.
University at Buffalo: Researcher explains benefits of using geotagged content in research - "In a recent commentary published in the journal Nature Human Behavior, UB geographic information science expert Yingjie Hu and colleague Ruo-Qian Wang wrote about how Twitter’s decision to remove users’ ability to tag the precise locations of Tweets might affect research in disaster response, public health and other areas."
AgriNews: WIU GIS Center maps crops and criminals - The center uses drones. "There’s nothing really special about this drone. This is something anyone could buy at Best Buy or on Amazon. It’s really what we do with the data and how we collect images. For example, we can make a satellite view in Google Maps. For the research plots out here, that’s really valuable,” says center director Chad Sperry.
WIU: Two WIU Graduate Students Collaborate with Faculty to Research Diversity of QCs' Bicycle Trails - "Recreation, Park and Tourism Administration (RPTA) graduate student Sadie Parker, of Redlands, CA, and RPTA alumna Haily Hinson, of Hohenwald, TN, are in the process of making edits to their paper, "Spatial Accessibility of Bicycle Routes in the Quad Cities: Impacts for Environmental Justice." The two authors wrote the paper as part of their graduate studies with RPTA Professor Rob Porter and hope to have it published in an academic journal."
ASU: Two ASU geographers investigate COVID-19 challenges through a geospatial lens - "Two professors with Arizona State University's School of Geographical Sciences and Urban Planning have been selected for fellowships to further investigate these challenges." The research projects are part of The Geospatial Software Institute (GSI) Conceptualization Project, which is supported by the National Science Foundation.
Meanwhile in our Industry
Google Blog: The Navajo Nation addresses its residents with Plus Codes - "The Navajo Nation has been using Plus Codes to establish locations of community resources like watering points, food distribution locations and free public Wi-Fi hotspots."
VentureBeat: DuckDuckGo ducks Google to launch route-planning powered by Apple Maps- "Privacy-focused search engine DuckDuckGo is finally adding walking and driving directions to its online mapping service, a feature that will be powered by Apple’s MapKit JS framework."
For Educators

NatGeo Blog: National Geographic Society Launches COVID-19 Emergency Fund for Educators - The National Geographic Society launched a fund for K-12 educators who are designing instructional resources to help other educators teach in remote- and hybrid-learning environments. "The fund aims to support at least 50 teaching professionals, including formal and informal classroom educators, with grants ranging from US$1,000–8,000."

Geographical: Study Geography 2020: your 24-page guide to studying geography at university - It's a free ISUU publication, basically an e-book with lots of ads from UK universities.

jaxenter: Women in Tech: “Take responsibility and ownership for your own growth” - An interview with Kim Wachtel, VP of growth engineering and UX at JumpCloud reveals it was GIS programming that prompted her interest in tech.