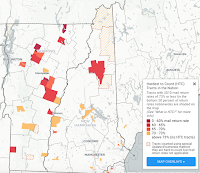 
LinkedIn: A post from Ozair A. Khan, who works in GIS in oil and gas, shared an analogy. "The relationship between GIS professionals and cartography is like that between professors and teaching."  It's an interesting proposition to consider. Via Rich Schultz.


Joshua Stevens: Graveyards of the Contiguous USA - "Using data from OpenStreetMap, I compiled an inventory of 144,847 graveyards and cemeteries in the contiguous United States."

WaPo: National Fantastic fall foliage… and where to find it - "Some areas of the country are more likely to experience those bright red and orange leaves than others. New England is a perennial fall destination because of its abundance of tree species contributing bright colors." Fun and very pretty.

University of Kentucky: There will be four live sessions via Zoom for those interested in the school's geography M.A. and Ph.D. programs. All sessions will take place from 12:00 to 12:30 p.m. US ET. I'm seeing more schools offer these sorts of "meet and greets" for graduate students.

Brookings Register: SDSU gets top research ranking - "SDSU ranked 22nd in the world and fifth in the U.S. based on research productivity in the area of remote sensing for the period 2013-17." Can you name the other top schools in remote sensing?

Columbus State: Columbus State and City Government Collaborate for Clean up - "The Geography program of CSU has a long history of engaging students in projects that actually apply what they are learning in their classes to solving real world problems. The program believes these community projects ground students, helping them see the connections between what they learn in class and what they can do when they graduate." The work involves mapping blight and working with a GIS user, Charlotte Davis, the Inspections Services Coordinator in the Department of Building Inspections and Code Enforcement.

Indian Institute of Technology, Kharagpur: Spatial Informatics - A new MOOC on spatial informatics started earlier this month with about 1200 students. Via Class Central.

Esri: Do-It-Yourself Geo Apps - This four week MOOC introduces a wide array of configurable apps including storymaps, via a new Builder, and native apps, via AppStudio desktop. It starts Oct 30.

HREC: Educator Thomas Mueller receives 2019 HREC Educator Award for Holodomor Lesson Plan Development - "HREC Education, of the Holodomor Research and Education Consortium (HREC), a project of the Canadian Institute of Ukrainian Studies, University of Alberta, is pleased to announce that its national panel of three education adjudicators has selected the 2019 winner of the HREC Educator Prize for Holodomor Lesson Plan Development. This year, the judges have awarded one prize of $1,000 CAD to Dr. Thomas R. Mueller of the California University of Pennsylvania in California, PA." The lesson in question, which will be publicly accessible, uses geography to explore  the Holodomor. From Wikipedia: "The Holodomor was a man-made famine in Soviet Ukraine in 1932 and 1933 that killed millions of Ukrainians. It is also known as the Terror-Famine and Famine-Genocide in Ukraine, and sometimes referred to as the Great Famine or the Ukrainian Genocide of 1932–33."

PAEMST: "The Presidential Awards for Excellence in Mathematics and Science Teaching (PAEMST) is the highest recognition that a kindergarten through 12th grade science, technology, engineering, mathematics, and/or computer science teacher may receive for outstanding teaching in the United States. Up to 108 teachers are recognized each year." One of them is a well-known geography/GIS educator: Erika Klose. Congrats! Via Michael Gould.

The Scribe (University of Colorado, Colorado Springs): GIS club to combine humanitarian relief and data with mapathons - "The GIS club will host mapathons on campus to engage students with data analysis and humanitarian relief through open source platforms like OpenStreetMap, according to president and senior geography major John Hardwick."

The Diamondback: New map project provides a visual tour of UMD’s transformation - "A new map project by the University Libraries, “From MAC to UMD,” traces this university’s history and constructs a timeline through old maps, development plans and photos. The project was headed by Caitlin Burke, a geospatial information science graduate student. Burke who graduated in 2018, now works in the University Libraries GIS and Spatial Data Center as a project manager."

SMH: The edge of the map: the steady decline of topographical cartography - "Paper topographical maps, ..., are disappearing from sale as [Australian] government departments save costs and consumers switch to electronic navigation aids."

Inside Higher Ed: Endurance Tests - This blog post responds to the recent Atlantic article that suggested students do not want anything fancy in their libraries. This was an interesting example to use: "Better to have assistance with, say, GIS in a library that’s open late than in three or four separate department labs with limited access. I’m not saying there isn’t sometimes a need for a department to have its own dedicated lab -- but if an institution wants to invest resources in GIS or 3-D printing or video production and a lot of people want those resources, it sometimes makes sense to share."

Time Off for Good Behavior

I'm off to Milwaukee next week to attend and present at Learning with MOOCs 2019, an IEEE conference. While in town I'm speaking about lifelong learning at UW-Milwaukee; thanks to Donna Genzmer for helping arrange that. Then I'm taking some vacation. Expect the next issue of GIS Education Weekly on Nov 7.