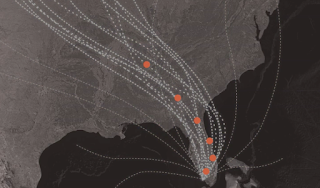 NY Times: Those Hurricane Maps Don’t Mean What You Think They Mean - Alberto Cairo wrote this opinion piece. It's getting lots of play in the geo and cartography space.

Twitter: Regional pronunciations that immediately out you as a newcomer - Ryan Beckwith from Bloomberg and others provide examples. I'll share one: Milan, Illinois.


NPR: Amateurs Identify U.S. Spy Satellite Behind President Trump's Tweet - It seems the president may have shared an image from a secret spy satellite. Clever individuals used the image to determine the nature of satellite. Secrets are not always so secret.

NPR: As Rising Heat Bakes U.S. Cities, The Poor Often Feel It Most - "In dozens of major U.S. cities, low-income neighborhoods are more likely to be hotter than their wealthier counterparts, according to a joint investigation by NPR and the University of Maryland's Howard Center for Investigative Journalism." The analysis used Landsat data and the code is available on GitHub. The analysis covered the 100 most populated American cities.

FOSS4G Bucharest Videos: There's video and audio, though I could not easily find how to download the audio.

Twitter: Ladies of Landsat A feed about women in remote sensing. It's pretty active, too.

Michigan State: $3.3M Grant to Fund Study Exploring Impact of Green Spaces on Health of Detroit's - "Amber Pearson, assistant professor of geography in MSU’s College of Social Science, is leading the five-year study that will examine how biodiversity in an urban area impacts health and wellness."

Locate Press: 25% limited time discount on all e-books. Via Twitter. It's not clear when the offer ends.

UW- Madison: Interview with Emily Pettit - She's the GIS Coordinator for the State of Maine GIS Office and a graduate of the certificate and master's programs.

Geekwire: Geek of the Week: Tableau’s Sarah Battersby finds her way in helping people use maps and spatial data - "A research scientist at Tableau in Seattle, Battersby is our latest Geek of the Week." Tableau was recently acquired by Salesforce.

Esri: Going Places with Spatial Analysis - Esri's first MOOC launched in 2014. It's still very popular with more than 16,000 currently registered. The course opened on Wednesday and registration is open for another week or so. For those who took a MOOC in the past, we've got a neat new way to provide credentials.
Posted by Adena Schutzberg
Email ThisBlogThis!Share to TwitterShare to FacebookShare to Pinterest
Labels: certification, hurricane, mentoring, weekly
Newer Post Older Post Home