Men and Women in Geospatial

There were two "discussions" on gender in cartography this week and a press release on "gender balance" that may be valuable conversation starters.

Longitude, a newly announced community of cartographers, prompted one discussion.

A shoutout to #womenincartography prompted another.

GEO Business, an event in London in July, published a press release on its gender balance efforts. "One session in the 22 seminars at GEO Business has no less than five female speakers. Over half of the sessions have at least one female speaker."

USGIF: Organizational Training & Professional Certification Offer - USGIF is offering group rates (with suggested savings up to 80% off) when 15-25 employees from one organization select a package of training (online or in person) and a certification exam. 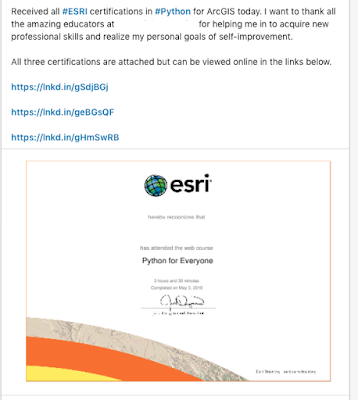 The program appears to be for K-16 educators; fees start at $1400 including a drone kit.

The Conway Daily Sun: Mapping NH's stone walls: High-tech link to past - “Educators could be interested in incorporating this crowdsourced mapping project [The N.H. Stone Wall Mapper] into their classrooms because getting students interested in their own community’s culture and history is a great way to promote stewardship,” says Tanya Krajcik, deputy state archaeologist.

The Fitchburg State Point: Fitchburg State Helps Combat Opioid Crisis - "In Oct. 2018, Fitchburg State University announced a partnership with the Worcester District Attorney’s office to combat the opioid epidemic in the area. ...Fitchburg State’s role in the partnership includes collecting and reviewing local data related to overdose deaths. The goal is to identify the hotspots in the area of overdose deaths, non-fatal overdoses and crime. The University faculty and students will assist directly using Geographic Information System (GIS) mapping. Fitchburg Police will look to use this information to try and locate large scale drug distribution networks."


AP: Students Use Drones To Map Dinosaur Tracks In New Mexico - "New Mexico State Parks recently announced it is teaming up with Central New Mexico Community College students and the New Mexico Museum of Natural History and Science to map out the footprints at Clayton Lake State Park..."

Keene State (NH):Geography Students Tackling Renewable Energy Resolution in Keene - "The idea, said Professor Chris Cusack of the Geography, Outdoor Recreation, and Planning Department, was to identify and map out the warmest areas of town as well as the homes most suited for solar panel installation. That could help the city as it looks into possibilities like tax incentives for alternative energy for heating and air conditioning, he says."

Georgia State: Student Creates Atlanta Rap Maps Featuring Childish Gambino, Other Stars - Adnan Rasool is a political science Ph.D. candidate and a huge hip-hop fan. According to the article he was involved in building Rap Maps; I do not find his name noted in the project itself.

Planet: Stanford Students Can Now Harness The Power Of Planet’s Satellite Data - "Planet has partnered with Stanford University, providing students with subscription access to Planet’s data and satellite imagery. ...Stanford Libraries—with support from the Natural Capital Project and The Center on Food Security and the Environment —decided to partner with Planet." ASU was the first academic partner; the relationship was announced in March.

Caliper: Maptitude Mapping Software Team Provides Awards & Prizes for 2019 AAG Student Paper Competition - The first and second place winners were Connor Reed and Matt Sorenson, both of University of North Texas. In addition to winning cash awards, the two students will each receive a student license of Maptitude 2019.

YouthMappers: Blog - The YouthMappers' blog shares stories of what chapters and individuals are doing. Via @sterlingGIS.


Longmont Observer: Boulder County Removes Degree Requirements for 82 County Positions - The goal is better equity and inclusion. Among the positions that will no longer require a degree? GIS Manager.

Spatial Networks Blog: A Female Programmer’s Story - A person learns to program, finds a company of interest, works hard, and gets a job there. I'm hopeful that in time this might be re-titled "A Programmer's Story."

Arizona State: Geography student discovers passion and community at ASU - First-generation student Abigail Johnson is graduating with her bachelor’s degree in geography from the School of Geographical Sciences and Urban Planning.

Minnesota Daily: Vice Provost McMaster's reach extends across University map - Robert McMaster has worked at the University for 30 years as a geography professor, researcher and longtime administrator. He recently returned to the role as vice provost and dean for the Office of Undergraduate Education.

Last week I noted the article titled Explain GIS Better, which looked at some descriptions of GIS. I didn't have the cycles to document my response to the challenge. After thinking about the request for a week, I realized I did not have one on hand. I do however have my college definition of a map, should that be helpful: "A map is representation of a structure, and a structure is set of objects and the relationships between them." Also, from grade 8 Civics with Mr. VonKlock: "An amendment is a change in, or addition to, a legal document."

Once I left college and did some teaching I realized that words may not be the best medium for definitions or explanations. I moved to something else: performance art. If I recall correctly, I was giving a presentation to some Esri ArcCAD dealers back in 1993 or so. The audience understood   what CAD was and how to sell it, but had a hard time grasping what GIS was and how to sell it. They knew all about drawing lines and rectangles and saving them on layers inside a DWG file. The idea of creating a spatial database with topology and being able to query it was all new.

Somehow I got the idea that I should leave the gory technology details aside and anthropomorphize a point feature and how it behaved and what it knew in a CAD drawing and contrast that with a point in a spatial database. I did a shtick about "I am a point" and how I, the point in the CAD file, knew I was on a layer called "fire hydrant," that I was at certain coordinates, but that I knew little beyond that. In contrast, when "I" was in the spatial database, I the point, knew more: I knew I was "near" a line and "inside a polygon." I'd jump around and be all goofy. The dealers would laugh, but they'd get it.

Some twenty five years later I suspect that performance art might still be a better medium to explain GIS. If asked to "perform" today, I'd probably anthropomorphize the spatial database itself, up in the cloud. I'd talk about the kinds of questions "I" can answer and how "I" might answer with a "yes'" or "no" or with a map or with a number or a list or infographic or story map.
Posted by Adena Schutzberg
Email ThisBlogThis!Share to TwitterShare to FacebookShare to Pinterest
Labels: certification, gender, opioids, planet, weekly
Newer Post Older Post Home