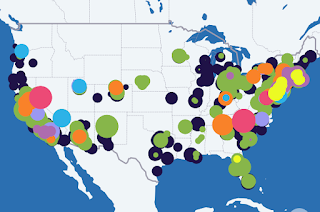 Fast Company: Map: Where Apple, Amazon, and Walmart built their solar farms - It's a Mapbox map.


The Verge: OLPC’S $100 Laptop was Going to Change the World - Then it All went Wrong - A nice history lesson about edtech.


IEEE Spectrum: The Geek Life section has three interesting historical articles about GPS. They cover why GPS receivers are small, the fellow who got GPS funded and Trimble's success in the marketplace.

CityLab: The Geography of Health in America - "A new county-by-county report finds that blacks and Native Americans have the most dire health statistics in the United States."

Apply by May 30 to join new Intro Course on GIS and Spatial Analysis for Social Scientists from UChicago taught by Marynia Kolak.

NYTimes: - How Liberty University Built a Billion-Dollar Empire Online - "By 2015, Liberty had quietly become the second-largest provider of online education in the United States, according to The Chronicle of Higher Education, its student population surpassed only by that of University of Phoenix, as it tapped into the same hunger for self-advancement that Trump had with his own pricey Trump University seminars." The online program pretty much funds the residential one.

Ron Fortunato and his students at A World Bridge assisted small-holder farmers in Africa in managing the Fall Armyworm through the Fall Armyworm Monitoring & Early Warning System mobile app. The work was done via the the UN Food and Agriculture Organization. Via Geo for All.

Esri's Cartography. MOOC has just about 35,000 registrants as of today. Registration is open until May 2.

MIT is staffing a Digital Humanities Lab; the school is looking for two postdocs.

Jerry Shannon shared this assignment he did with students in his Community GIS class. They "used land use and Sanborn maps, combined archival and current census data, to look at the legacy of segregation in one Athens neighborhood currently experiencing displacement pressures. This Storymap [sic] is one good example."


The Brookhaven Currier: Former student takes UAV flight -  Seth Bullis  start with a GIS dual credit course offered at his high school in Dallas County, TX for college credit at Brookhaven in September 2013. He eventually decided to attend the community college and next fall he'll be at Texas A&M.

Inland Empire: Cal Poly Pomona Spring Career Fair on April 26 will have Record Number of Employers - "The National Geospatial Intelligence Agency was so impressed by the Cal Poly Pomona students they met earlier this month, said Munnerlyn, that they decided to come back for the Career Fair and do more information sessions. The agency is seeking students majoring in computer information systems, geography, math, business and other areas."

India Today: Balabharti's class 10 geography book is full of mistakes, contains error in maps and charts - "TOI, retired professor and member of the Mumbai Geography Teachers Association Vidyadhar Amrute pointed out that several maps are not scaled to size." Some charts were inconsistent, too.

Press release: Esri’s Dawn Wright Celebrates Earth Day by Speaking at EarthxOcean Conference - "Presented by Mission Blue and EarthX, the conference is designed to increase awareness of the important roles that oceans play in peoples’ daily lives and to stimulate greater corporate and government support to protect the world’s oceans." Dawn and my colleague Drew Stephens are our education and science "ocean" people.

USGIF: K-12 Students Introduced to Geospatial Sciences at GEOINT 2018 - There were posters, a 10-foot inflatable globe, technology demonstrations, and a panel discussion with leaders from academia, government, and industry.

The Open Source Geospatial Research and Education Symposiums are biannual meetings of the OGRS community focussing on the use of free and open source software in research and education. The 5th edition of the OGRS meeting series is going to be held from October 9 – 11, 2018 in Lugano, Switzerland.
Posted by Adena Schutzberg
Email ThisBlogThis!Share to TwitterShare to FacebookShare to Pinterest
Labels: azavea, olpc, USGIF, weekly
Newer Post Older Post Home