GIS Education Weekly: Should the GIS Tool Matter? Where's the Collected Wisdom on the GISP? 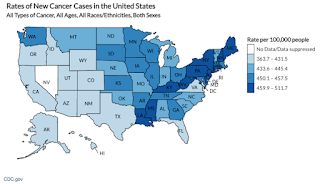 PBS News Hour: Column: Why geography matters for students now more than ever - Junior high science and social studies teacher Chris Heffernan's WorldGeoChat blog was picked up by the NewsHour.

All Over the Map Blog: How Advertisers Have Used Maps to Try to Sell You Stuff - The post celebrates the PJ Mode Collection of Persuasive Cartography at Cornell University. h/t @cartonerd

Projected.xyz: The tool shouldn't matter - Alex Mahru explores "the argument for the use of Esri versus non Esri software."

ASPRS May and June Webinars Schedule:

WaPo: U.S. Census director resigns amid turmoil over funding of 2020 count - John H. Thompson, who has served as director since 2013, will leave on June 30. I include this since many people tweeted it at me and I'm not sure it will show up on the GIS news sites.

As I try to do each year, I pedaled over to Tufts to see what students in introductory and advanced courses were creating with GIS. I found a full house of posters, about 220. This being Boston, some themes were popular: equity, food, bikes. I saw one poster comparing alcohol related deaths before and after Uber came to a midwest city. It certainly did not seem like students had a tough time finding interesting topics to explore! 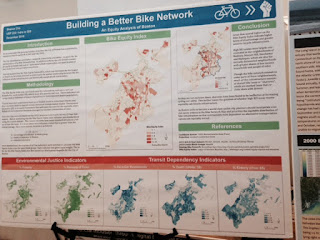 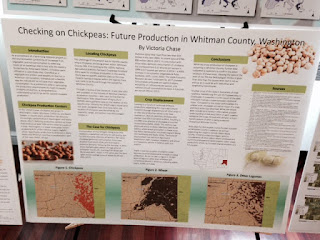 The Google Summer of Code projects for OSGeo for 2017 are set. Fifteen students will work on projects.

Mapbox is offering its 2017 ProjectCSGIRLS-Mapbox SF Workshop on May 13th at the Mapbox SF office. You must be in middle school (6th - 8th grade), be a girl, and reside in California to be eligible to attend according to the registration form.

The URISA Vanguard Cabinet announced its student competitions to be held at its GISPro2017 event (Jacksonville, Florida October 23 - 26, 2017). Basically, college students submit proposals for Ignite presentations and high school students submit proposals for posters. Some of them will apparently be presented at the conference. Students must be able to attend the event on their own dime. Prizes include URISA conference registrations and memberships.

Update May 11: Just after I posted this issue, the AAG announced that the high school attestation minimum had been met.

It was a bit of a slog, but as of today the AP GIS&T course proposal has surpassed the minimum number of high schools and universities needed to qualify for official review and consideration at the College Board. You can see a list here:
www.apgist.org

The AAG proposal is currently collecting support from high schools, colleges and universities so that the proposal for the AP GIS&T course can receive a formal review.


As of today, the AP GIS&T proposal has been supported by 119 colleges and universities. This number exceeds the minimum requirement of 100 attestations from higher education institutions.

The numbers look good, but more high schools are needed: There's an invitation to help gather the attestations, with a goal of hitting the 250 mark before summer vacation.

Stamen Design won the Interaction Design Award, one of the National Design Awards from the Cooper Hewitt, Smithsonian Design Museum. Stamen Designs is one of those organizations about which everyone in geography should know.

"The City of Cambridge and Salisbury University will be jointly recognized with a Special Achievement in GIS (SAG) award at the ESRI [sic] user conference in San Diego California in July for its pilot blighted housing study, which married ArcGIS and Survey123 software to effectively measure risk factors leading to eventual housing blight." (local paper)

The Danbury Museum & Historical Society in Danbury, CT will host a week long summer camp on cartography. "The Cartography camp will explore the art of map making and will be held August 14 through August 18, 2017. Campers will learn the skills needed to recreate historic maps and how modern mapping is used in our community today. This session will include several off site walking excursions as we map Main Street locales and witness the use of cartography in action." h/t @PetersonGIS

The National University of Singapore's (NUS) Department of Chinese Studies is using crowdsourcing to develop an online interactive map of more than 1000 Chinese temples in the country. The first contributors are NUS undergraduates who studied 69 temples as part of a module called Everyday Life Of Chinese Singaporeans: Past and Present. In time residents will be asked to use a mobile app to contribute data. The technology is from Esri and Google.

Last week Microsoft updated its offerings for education. Among them, is a new focus on mixed reality. "Today, we announced a new strategic partnership with Pearson, one of the largest education companies in the world, who is working to integrate 3D and mixed reality into their secondary and university level curriculum. By the school year 2018, Pearson will offer curriculum in health, commerce, history, and STEM, on all Windows Mixed Reality devices. In addition, we announced a new feature coming to Windows 10 this fall, called View Mixed Reality. This feature allows you to see 3D content through your screen into the real world as mixed reality, using a simple RGB camera."

National Science Foundation (NSF) Advanced Technology Education (ATE) program has funded the National Geospatial Technology Center of Excellence (GeoTech Center) to continue its work in geospatial technology. The grant award covers five years and provides approximately $4 million. I found this press release from North Park University, but could not find one from the GeoTech Center. The center is offering a webinar on its future plans on May 17 including discussion of:

One of Esri's MOOC students shared a link to a MOOC (FutureLearn) on the basics of Python and Jupiter: Learn to Code for Data Analysis. It began just this week and runs for four weeks.

The University of West Florida offers its MOOC (Canvas), Introduction to Geographical Information Systems, May 15 - Jun 26, 2017.

Passing
Marvin W. Mikesell, professor of Geography at University of Chicago, passed away Apr. 26, at age 88. He was the "lead" cultural geographer in the small department when I studied at Chicago from 82-86. I wrote my bachelor's paper on Australia exploring many of his and Wilbur Zelinsky's ideas.
Posted by Adena Schutzberg
Email ThisBlogThis!Share to TwitterShare to FacebookShare to Pinterest
Labels: ap gis&t, census, uchicago, weekly
Newer Post Older Post Home