URISA is hosting a student competition with the finals at its Toronto GIS Pro event this fall. College students (enrolled in geo courses spring, summer or fall 2016) can compete for prizes of money ($500, $300 and $200) and free registration to the event (but no travel funds) and paid Young Professional dues upon graduation. The first round of the competition involves the creation of a video; the top three from that round will go to Toronto for the final. Videos are due September 2. The conference is Oct 31- Nov 3.

The National Center for Research in Geography Education's (NCRGE) GeoCapabilities project announced a teacher training website to prepare teachers as future curriculum leaders. This was an international effort; teacher training and workshops in different countries are planned in the coming months.

There's been a healthy discussion on the Geo for All list about making the GeoAcademy materials easier to find and use.

At the end of June Google announced the final version of Google Expeditions, the VR tool aimed at education. It's available now for Android and will be available for Apple devices later. Google reports more than one million students in 11 countries visited new locations during the testing phase. Best Buy is preparing to sell hardware kits to schools in time for back to school.

4-Hers explain why they love GIS in this video captured at the Esri User Conference. 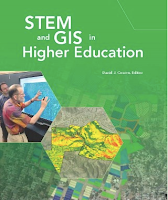 Esri offers a new e-book STEM and GIS in Higher Education in a story map (with some unfinished parts), an Epub and a PDF.

Details on how to access Esri's webinar today (1 pm EDT) about education license changes is available on GeoNet. The session will be recorded and a second one is planned for August.