2015: The State of GIS and Geography Education

I've been doing year end recaps of the GIS industry for more than a decade. My interest has focused more on GIS and geography education for the last few years. I started writing about the topic regularly when I was at Directions Magazine and continued via a newsletter which launched in December of last year.

This will be my first recap detailing the state of GIS and geography education.


Software Vendors Reach Out to Educators and Students

While Esri continues to be the most prolific software vendor contributing to GIS education (in dollars, software, staff time and resources), many of its peers launched or updated their offerings for teaching and learning.
I am pleased that educators have many options and more access to software and resources via these efforts. That said, I must point out that these sometimes half-hearted announcements (education@boundlessgeo.com still bounces!) are but toes in the water. Uptake from educators, along with demands for more support, are the true measures of effectiveness. One other measure: Will software beside Esri's be used in next year's Geospatial Skills Competition?

More schools have announced online and face to face GIS education programs. Some students leave with a certificate and others with a degree. Schools I've never heard of, such as Arkansas Tech, are starting up programs. Schools with renowned Geography/GIS programs, like the University of Kentucky (UK), are too. Just this week I saw a post on the Maine GeoNews discussion list advertising UK's New Maps Plus courses. I like to believe a rising tide raises all boats.

To a prospective student most of these programs may appear to offer the same things. It's very hard to compare prices, courses or find compelling distinguishing features. The University of Arizona detailed how it stands out in an e-mail, but I was unable to obtain further details. The bottom line for 2016: Competition is increasing and making a solid case for a program's uniqueness is more important than ever.

If I had to guess, the most popular topic of GIS/geography education stories in 2015 related to large maps visiting elementary schools. Next on the list would be those related to service learning. More and more programs are formally or informally taking on real world projects in local or distant communities. This is not a trivial change; managing the processes, products and educational realities of these projects puts quite a burden on students and instructors!

Many of the articles and presentations on the topic this year focused on the value of the work to the client and the real world experience of the students. I want to hear more about what is taught and learned, specifically which technical skills and soft skills. These will be what students are selling to future employees whether they pursue GIS as a career or not.

ConnectED: Year One and a Half

Esri and its partner the Association of American Geographers (AAG) continue to prod K-12 educators into using GIS in the classroom. Esri launched its three year ConnectED initiative commitment in May 2014. That means we are about halfway through.

Esri's Charlie Fitzpatrick shared that at the end of 2014 Esri counted 1000 schools and organizations signed up for free access to ArcGIS Online. By the beginning of December 2015 that number rose to more than 2600.

In 2015 Esri focused on developing and delivering several dozen GeoInquiries: free, short, standards-based, no log-in required GIS-based lessons. They fall into three content areas: Earth Science, American History and Advanced Human Geography. Fitzpatrick reports that the GeoInquiries have received some 25,000 "reads." The company also offered workshops around the U.S. in addition to its annual Teachers Teaching Teachers GIS (T3G) event in Redlands to get educators up to speed on the technology and the value of the geographic perspective. I also want to acknowledge that Esri tidied up the initiative webpage to make it far more valuable to educators!

The AAG signed on some 700 GeoMentors (as of November 2015). Candice Luebbering, who leads the AAG effort, shared some numbers on engagement.


We have 150+ reported engagements (completed or ongoing) from our GeoMentors (some GMs doing multiple engagements). We have additional info from GeoMentors who are planning future events already for the spring as well!  These activities are just those reported through our email checkups and online forms; we imagine there are more that folks haven't had a chance to tell us about.

Esri's ConnectED proponents are fighting the good fight while running into the challenge of scaling up the program. The GeoMentor effort relies on one-to-one contact between a GeoMentor and an educator. There are also a number of learning communities (link #2 on this Story Map) weaving GIS into classes and after school programs. I follow the NSF-funded GIS/T Resources and Applications for Career Education (GRACE) group on GeoNet. This Michigan-based community shares the ups and downs of working with GIS. The same is true for an effort at the Detroit Public Schools Youth Technology Corps GIS Initiative. These local or regional learning communities may be the next logical step to scaling up.

Two organizations are leading the charge to integrate FOSS4G into education. I covered news from The GeoAcademy and Geo for All pretty regularly in 2015. The former offers OER course materials and for fee online courses via DiscoverSpatial. The latter is a program formed by OSGeo and the ICA to build FOSS4G "labs" at universities worldwide. The website identifies 107 labs at various levels of activity. Geo for All has had some growing pains and is currently redefining its relationships and mission.

The real question is if/how open source software is being used in education. A survey in 2012 suggested fewer than 5% of respondents offered training on open source. My hunch is that percentage has grown in GIS and other disciplines. Clearly, we need some updated statistics!

In the meantime, I'll share some anecdotal information. It seems that more and more academic GIS programs are including open source software in their curricula, which may or may not mean they offer "training." I hope that leaders and administrators are listening to advisory boards and demands of employers. I hear those group demanding well rounded employees, which to me means those who are familiar with open source. I've argued for some years that it's important for students to touch, use and teach themselves lots of different software (proprietary and otherwise). When possible, I suggest students use different packages in coursework and service learning rather than being "trained" to use them.

All Quiet on the MOOC Front

Geo and GIS MOOCs have lost some buzz. The situation is the same with other MOOCs. Esri launched the only new GIS-focused MOOC of 2015, the business geographics MOOC Location Advantage, this past spring. The company has two new MOOCs planned for 2016 covering app development and remote sensing. Only two vendors, Esri and Google, ever ran GIS MOOCs. And, Google ran its Google Maps MOOC just once, back in 2013.

I believe that the MOOCs that "worked," that is, achieved their intended purpose, are staying around. These include MOOCs from Pace University, the University of West Florida and Penn State. These all served as marketing efforts for their respective programs and from what I've heard from the instructors, where at least in part, "labors of love." The GeoAcademy QGIS MOOC content is staying around as a for-fee course.

I think Audrey Watters is spot on in her giggling about this stat:

American Sentinel University stopped accepting applications for its GIS programs in January 2015. I learned of it in March and followed up and confirmed all the school's GIS programs were closing down.

Many, many students have made Story Maps in 2015. Their instructors, from K-16, have attended conference sessions and taken free online classes from Esri to learn the basics. These educators may even have attended a free seminar from NCGE on the topic just this month (Mapping Your Stories With Esri StoryMaps [sic])!

I applaud the making of maps! I wonder if students are learning how to use (that is, find information on, find patterns on, ask questions of, find the "point" of) online maps in general and Story Maps in particular. Do students actually use student-made and professionally made Story Maps to learn spatial thinking or course content?

I know that Maps.com uses Story Maps as part of an educational package. I am not sure if the ones in this textbook are generic ArcGIS Online maps or actual Story Maps. The maps I've seen in Esri's GeoInquiries are generic ArcGIS online maps. I see lots of Tweets about "great" Story Maps but few resources about how to use them to teach spatial thinking or content.

Part of what I'm trying to distinguish is what students learn from building a map vs. what they learn from using maps. And, that leads to a pedagogic question: Which should come first, using a map or making a map?

Too Much Sage, Too Little Guide

I continue to see and read about lecturing in GIS and geography courses. Here's a class at the University of Redlands in a photo shared on its Center for Spatial Studies Facebook feed. The topic of the day: business spatial analytics. 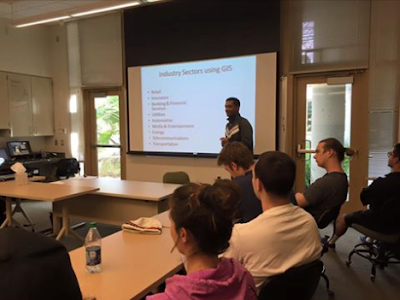 I'm pleased to see at least some activities do not include students looking at PowerPoint. Susan Campo, a geography and science teacher at Graydon Memorial Secondary School in Mississauga, Ontario, Canada shared this on Twitter. Her students are starting an inquiry on First Nations efforts to block an oil and gas pipeline. 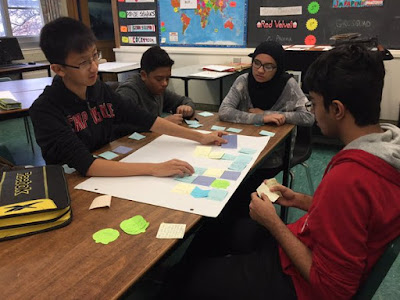 Is there less PowerPoint and more active learning in geography and GIS courses? I don't know, but I have one exciting data point: a flipped college GIS course.

More Certificates, Certifications, and Tests Confuse Those New to the Field

The number and kind of GIS credentials grew 2015. GeoBadges are a new credential to earn and share. During the year USGIF launched a three-test-based Universal GEOINT Certification and Esri a test-based ArcGIS Desktop Entry-Level Certification. These new additions along with a variety of educational undergraduate and graduate certificates and degrees are making students', practitioners' and hiring managers' heads spin. I expect the kind and number of credentials will increase in the coming years.

The queries on Reddit/GIS from students and early career professionals about credentials prompt empathy. The fierce competition for jobs in many regions is the basis for queries about credentials as "magic bullets" to gain employment. The responses, from those who I suspect have gray hair like I do, are pointing to expertise in both GIS and an allied field, such as forestry or business as the best way to go. The challenge for a job seeker with a "GIS plus a discipline portfolio" is explaining the value of the dual expertise on a resume or in person.

On balance my coverage of GIS and geography education may lean toward the negative. I try hard to be sure that when that's the case my input is at least constructive. I am a big fan of trying and failing either a little or a lot. I'll quote Tim O'Reilly to confirm my respect for those "fighting the good fight" to teach GIS and geography:


Pursue something so important that even if you fail, the world is better off with you having tried.