The Guardian: Geography is "must have"

The UK's Guardian newspaper offers an editorial pointing out the increased interest in geography via the A-level exam.


According to the Royal Geographical Society, 13% more took the subject at A-level this year than last, up to 37,100 – the biggest jump of any of the major subjects.


Part of the explanation is [former Secretary of State for Education] Michael Gove’s determination to make schools focus on more traditional academic subjects at GCSE and A-level, rather than general studies or critical thinking.

The editorial also notes that geography graduates have higher employment levels six months out of school that others majors. I dug into the topic in a post earlier this week. 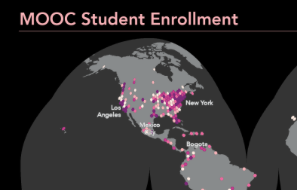 The blog post Making Maps of a MOOC from Penn State PhD candidate Carolyn Fish explains the process of mapping data from the school's Mapping and the Geospatial Revolution Coursera-hosted course.


Our latest whitepaper is here! Check out how CartoDB provides GIS solutions for the educational community: http://hubs.ly/H0141lG0

It's titled The Future of GIS Education. A cloud-based, open source GIS and mapping solution for education.

If you are not aware of the Esri Canada Education and Research blog you might want to put it on your RSS feed. The company offers its own set of ideas and resources, rather different from those of the U.S.-based education team.

Kris at Safe details how students in Niagara College’s GIS – Geospatial Management used FME to put some local geography onto the Minecraft map. There's a plug for the company's Academic Grant Program for Students.

Nathan Heazlewood posted his take on comments from successful job seekers in New Zealand in a LinkedIn post: GIS Young Professionals: Next Generation. He offer suggestions for educational institutions and employers to create and find employees.

Things were quiet after the founder passed away last July, but a press release announces the latest three day seminar set for Las Vegas. Priced at $1499, it counts as four credits toward a degree from the school.  The new provost is John Minor who previously served on the UVU Board of Directors and as a UVU Regional Director for the Mountain West Region. Remember: "'UVU is not accredited."

Most marketing for geography, GIS, and related degrees is pretty serious. The New Maps Plus program from the University of Kentucky wanted to do something different. It offered an undated (why?) post with a geeky headline: NMP Uses Leaflet to Map Tweets About Beer. The point was this:


If you're curious about how this map was built and designed (or are interested in doing something like this yourself) check out the New Maps Plus program. These are exactly the kinds of maps students will be learning how to construct.

A second post appeared July 16 on Floating Sheep (where several of the faculty also hang their hats), titled #BeerTweets. It also noted the New Maps Plus launch.


Now we want you to join in the fun of exploring this liquid landscape. To celebrate the rollout of a new online graduate program in digital mapping (New Maps Plus at the University of Kentucky) we offer up this interactive visualization of America's beer-related tweeting.

The latter post seems to have prompted coverage this August. The Atlantic's CityLab had the first article, dated August 13 titled The Geography of America's Beer Preferences, According to Twitter. It didn't mention New Maps Plus, though it is cited the Floating Sheep article. New Maps Plus' Matt Zook explained the reason for the map in a comment.


Thanks for featuring our maps! This was actually a project to celebrate the rollout of the new online graduate program in digital mapping at the University of Kentucky called New Maps Plus. We'll actually be rolling a range of tutorials on how to make interactive maps like this so if you are curious check out the details at http://newmapsplus.uky.edu/

iDigital Times, "a site dedicated to gaming, comics, gadgets and digital culture" used the headline Interactive Map Reveals Most Popular Beer Using Twitter Data on August 17. It sourced an article on Food and Wine titled This Interactive Map Tracks What Beers are most Popular Using Twitter also dated Aug 17. It cited the New Maps Plus post but didn't really highlight the education program.


Kim Gallon, an assistant professor of history, received $245,299 for "Space and Place in Africana/Black Studies: An Institute on Spatial Humanities Theories, Methods and Practice for Africana/Black Studies Scholars," and Cornelius "Neil" Bynum, an associate professor of history, received $200,000 for "From Plessy to Brown: The African American Freedom Struggle in the Twentieth Century."

The press release has further details. I hope GIS education conference organizers will invite these two to speak about their efforts in the coming years.

A 10 day course, Web-based GIS and mapping, from In Depth Research Services (IRES) is $2200 and aimed at those with or without GIS experience. Among the projects/services to be used CartoDB, Fusion Tables, Geoserver, QGIS. A second five day course uses QGIS to teach GIS Analysis for Health Sector Programmes. This is an interesting data point for those offering GIS training. I found both listings via ReliefWeb.

Esri hosted an event for its summer interns at the beginning of August. The interns are typically juniors and seniors in college. The teams, from all different departments at Esri, built apps, mostly using AppStudio for ArcGIS or the ArcGIS Runtime SDK for Android. The coverage (including a story map by... Esri Support Services maybe...) focuses more on what the Esri staffers learned. I'm curious what the students learned and I wonder if anyone from the ed team participated in any way.

The event is in Edmonton, Oct 26-28 and five students will get the $200 student registration fee waived. Transportation and lodging are the student's responsibility.

If you'd like to receive the GIS education news weekly via e-mail, sign up here! To the best of my knowledge it's the only weekly recap of GIS education available at any price.