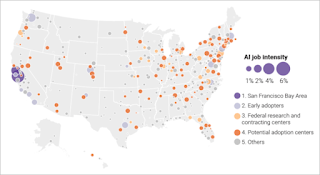 Today UK News: The geography of AI - "AI activity in the U.S. is highly concentrated in a short list of ‘superstar’ aggregations and early adopter hubs, often arrayed along the coasts"

Twitter: Carl Churchill notes: "You can extend the interactivity of #StoryMaps with live charts made with #d3 and @observablehq notebooks. Here is a chart sitting in a notebook, hosted in a #Github pages site and then embedded right into a Story Map."

NASA: Landsat Science Videos and Podcasts - Many of these were produced in the last few months. Via my colleague Delphine Khanna.

Boston Magazine: His Mission: To Map, and Eat, Every Cider Doughnut in New England - "One Cambridge man's quest to sample every cider doughnut has led to a list of 191 purveyors and counting."

Yale News:  Analysis unlocks secret of the Vinland Map — it’s a fake - "The Vinland Map, which purports to be a 15th-century map with a pre-Columbian depiction of the North American Coast, was drawn with modern inks, suggests a new analysis by Yale scientists and conservators."

CNBC: This map shows how Amazon is rapidly growing its air fleet across the U.S. - "As a result of recent expansion, 70% of the U.S. population now lives within 100 miles of an Amazon Air airport."

Twitter: Randall Hale writes: "Saying 'Advanced' and pushing for a good working knowledge of QGIS means squat. People taking the course had no clue what geopackage was and very little idea of what 'basic things' qgis did. So that's a problem. Next adjustment will be more flexible." A confirmation that education is messy, no matter what you teach or at what level.

The HR Director: Remove geography from the hiring equation, increase diversity of talent - The promise from one company: "no matter where you live, the compensation is based on the role, not the location."

URISA's Vanguard Cabinet Announces the Results of the 2021 University Student and Young Professional Digital Competition - There were eight finalists and three winners.
Programs and courses
UW Eau Claire: Brady and Jeanne Foust donate $1M to establish UW-Eau Claire scholarship - Dr. Brady Foust, a professor emeritus of geography at UW-Eau Claire, and his wife, Jeanne now retired from Esri, are donating $1 million to a scholarship for geography students. The couple is also donating $1 million to Pablo Center at the Confluence.

Spatially Enabling Campuses with ArcGIS is a three-part webinar series. The first webinar, Spatially Enabling Campus Utility Data, will be September 23 at 9 a.m. (PT). "The series will cover how campus utilities can leverage ArcGIS Solutions to quickly configure ArcGIS to manage electric, gas, sewer, stormwater, and water distribution data. We will elaborate on how ArcGIS Solutions adds new, prebuilt capabilities to existing implementations and gives campus utilities a system of record, a system of engagement, and a system of insight in a complete data model."

UNE: McKayla Arsenault ’22 joins UNE North as GIS and communications intern - "Arsenault will assist the institute in its communications efforts, including the use of geographic information systems (GIS) to help tell the UNE North story."