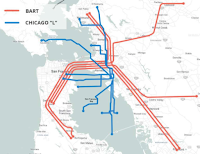 SF Gate: Maps compare BART’s footprint to other major transit systems around the world - I find this fun but it's not too helpful for analysis, according to this Twitter thread.

Esri Blog: Ten tips for using Survey123 and Esri Story Maps in your classroom - Mark Francek Professor of Geography at Central Michigan University shares a list. Via Allen Carroll. My favorite: "Some students would rather you solve their problem than having to read the directions. ... we should also harden ourselves in pointing students to specific sections of the exercise where 'the answer' can be found."

AdWeek: How Mountain Dew Turned a Geography Error Into a Source of Love for the Brand - "After mislabeling Michigan's Upper Peninsula, the soda went all in on making it right." After adding the UP to Wisconsin (on a map with room for improvement) the company made a unique bottle for the Yoopers. It's not really a geography story, but a "how to fix it when your brand makes an error."

Esri: Winners of the ISI & Esri Student Competition 2018-2019 - The top three were from Delaware, South Africa and Canada. The story map shows winners among the 47 submitters worldwide.

FOSS4G Bucharest: "For all those that cannot join us from various reasons in a week from now, in Bucharest, we are happy to say that you can tune in to the live streaming of all 11 parallel tracks and of course, the plenary sessions following these links http://streaming.media.ccc.de and https://www.youtube.com/channel/UC_2Lyc9VUX-jC-E1prJitHw." It appears a live streaming/open source group from Germany is providing the tech and staff to provide live streaming.

Syracuse.com: Onondaga Community College working to add seven new majors by next school year - Among the seven majors selected based on emerging industries in Central New York are Drone Technology and Geospatial Science and Technology. Most of the degrees will be two years. There's already a Public Service Leadership Academy (PSLA) at Fowler High School focusing on geospatial technology, so it's possible there will be a further connection built there.

c4isrnet.com: Just one third of this intel agency’s workers are women - "...women make up 32 percent of the NGA’s workforce, a figure that has remained steady for the past six years." But note that "four of the seven most senior executives at the NGA are women."

Hindustan Times: Now IT jobs for Arts students who take ‘geography’ as special subject - "Students from the arts stream who have completed their graduation in ‘geography’ as a special subject can now get jobs in IT (information sector) companies which offer good salary packages. These jobs are related to data management and Geographical Information System (GIS) mapping at various multi-national companies." The article makes it seem this is a new idea.

... alas, I have to take a mandatory course on ArcGIS. That's something I will only be taking for academic credit - plus, my home machines all use Linux as a primary OS.