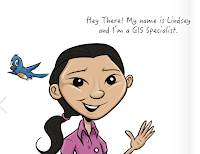 Bolton-Menk: The engineering firm offers e-books for children. The latest is Lindsey the GIS Specialist. It joins books about civil engineering and landscape architecture. Commenters on Reddit/r/GIS noted the GIS title might be valuable for adults, as well. Via Dawn Wright.

Two Historical Story Maps: Via my colleague Joseph Kerski: "Both of these are extensively researched and well done maps from an upper-level undergraduate student at the University of Northern Colorado."  He notes The Declaration of Independence and the American Revolution and The Negro National League and African-American Mobility, 1920-1931.

ASU: ASU looks to set world record for largest 'Walk on Mars' map - The map is currently the size of a basketball court. More than 5000 people have walked on it. The goal is to make a high resolution version that'd fit on a football field; fundraising is underway.

Atlanta Journal Constitution: Fulton principal ‘disgusted’ by map replacing Israel with Palestine - A map presented at multicultural night did not include Israel. An investigation is underway.

The Saint: Geography journal to relaunch - Students from the University of St Andrews School of Geography (Scotland) relaunched a peer-reviewed undergraduate journal more than 40 years after it was first published. The Irvine Atlas continues the tradition of the St Andrews Geographer (STAG) which was founded in the 1970s.

The Guardian: Are university campuses turning into mini smart cities? - "Across the globe, these mini metropolises [campuses] are increasingly opting for a smart city approach." Via Chris Akin.

The Williams Record: Student gamers respond to Jesup ban - After computers used for GIS labs moved to a new building during renovations, they were used for gaming. Eventually, gaming got in the way learning and gaming was prohibited in the building. Campus groups are trying to find a way to share the computers and spaces.

Times Call: Front Range Community College starts bachelor's degree program in geospatial science - The Longmont, CO schools announced its first four-year degree program, a Bachelor of Applied Science in geospatial science, which launches in April. The degree runs $21,500 with most courses held on nights and weekends. The program has one full-time instructor and follows other GIS offerings including a certificate and AA that have been offered in recent years.

UNH Geospatial Extension: Workshops (discounts for government/educators/non-profits) are set for mapping and LiDAR. There's also a bootcamp in June. Via @GISworkshops.

RTE: 'No plans' to review removal of Geography as core Junior Cert subject - Ireland's Minister for Education Joe McHugh will not consider changing the decision to remove geography from the list of core subjects for the Junior Certificate. That's despite a letter signed by heads of six university geography programs.