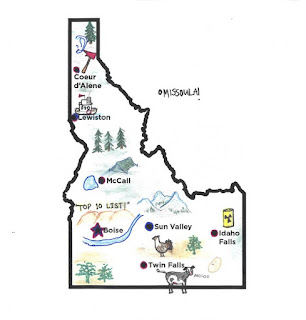 NPR: Here We Have Idaho: How Would You Draw A Map Of Our State? - The local NPR station asks readers to sketch and share how they understand the state.

BBC: Business Daily - The program had a three part series on mapping in Africa in 2018. The last episode ran last week and included TomTom and What3Words among others. Here are links to all three parts: 1, 2, 3.

Business Insider: Here's the most educated town in every state - Business Insider used American Community Survey data to map the percentage of people in each town (with more than 1000 residents) over 25 with at least a bachelor's degree. The methodology was supposed to remove colleges and universities, but towns with them were included. For example, Hanover, NH, home of Dartmouth College, is "the most educated" in that state.

Directions Magazine: Fifty Years of Commercial GIS – Part 1: 1969-1994 - The story from someone who lived it, Joe Francica.

The Chronicle (SC): The Index of Southerness: Southbound's GIS map - "The Halsey Institute [of the College of Charleston] commissioned Dr. Rick Bunch, a geographic information science (GIS) and spatial cognition specialist [at UNC Greensboro], to design an interactive map of the South, representing everything from street name maps to data collected on prison populations and churchgoers, among other topics." The story map is a component of a exhibition, Southbound: Photographs of and about the New South.

Story Map: The Environmental Protection Agency released an interactive map which shows the progress of the Debris Removal Process following the Camp Fire.


ArcGIS Blog: Hot Numbers: Behind the Scenes - Allen Carroll explains how the story map Hot Numbers was made.

GeoNet: Using story maps as communication and assessment tools at the university level - Dr. Karen R. Lips at the University of Maryland's Department of Biology shares her methodology.


LinkedIn: Encouraging Spatial Curiosity - My colleague Jan Willem van Eck from Esri Netherlands looks at the past future of GIS education. He focuses on the theme of "learning how to learn."

Ignite Education: How did that get published at Forbes? - After seeing citations of Forbes content covering GIS and related technology, I explored how content can be published on the magazine's website. Would you hold content in the same esteem if you knew a payment was rendered for  placement?

IdeaStream: University Of Akron Campus Safety - There's An App For That - The mobile app to report issues on campus is powered by Survey123.

Stanford: Stanford scientists locate nearly all U.S. solar panels by applying machine learning to a billion satellite images - "Stanford researchers have identified the GPS locations and sizes of almost all U.S. solar power installations from a billion images. Using the data, which are public, they identified factors that promote the use of solar energy and those that discourage it." I'm not sure how "GPS locations" are different from "locations" or if in fact GPS was used to determine them. I thought the locations came from the imagery itself. Here's the full text from Cell.

Jackson Newspapers: VSU Offers Farming Techniques Workshop - "Virginia State University held a mathematics and technology seminar at Randolph Farm to benefit local farmers. Drones and satellite mapping may not be the first things that come to mind when thinking about farming techniques but it’s exactly what southeastern Virginia’s farmers came to learn."

AAG: "AAG departmental survey data indicates a growth in the percentage of non-White undergrads from 13.6 in 2010 to 27.9 percent in 2018. At the graduate level, minority and foreign-born students now make up 42.7 percent of all geography students, up from just 21.5 percent in 2010!" Via AAG Tweet.

The Telegraph (UK): Chinese schools make pupils wear micro-chipped uniforms to thwart truancy - The ultimate source of the story is the government run Chinese news outlet Global Times. The tracking seems to use receivers in the school jackets; perhaps using GPS or China's own GNSS and/or RFID, along with facial recognition to prevent students from swapping jackets. The jackets have been in use since 2016; the schools report use of the sensors correlates with better overall attendance.