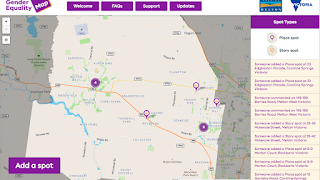 Mashable: Crowdmapping aims to tackle the problem of gender inequality in our cities - CrowdSpot, an Australia-based crowdsourcing platform, and Monash University's XYX Lab are creating the Gender Equality Map, a pilot program which launched in Victoria, Australia on Monday. "The map will allow the public to pinpoint instances of inequality in their neighbourhood, and eventually allow decision makers and designers to see the bigger picture."

Arguing for Geography in Schools

Wired868: Dear Editor: How re-introduction of Geography in school curriculum could prevent flooding (Trinadad and Tobago) - The guest column was submitted to Wired868 by former Trinity College (Moka) principal Michael Clarke, who was also in Curriculum Development at the Ministry of Education and Chief Examiner for CSEC Geography until 2016.

Geo for All: Suchith Anand is stepping down as co-chair of Geo for All.

Glide Magazine: Valley Maker's Austin Crane Explores Human Geography Through Psych - "Crane composes songs that feel in tune with nature and also the way we as humans interact with our surroundings. " She is currently working on a PhD at the University of Washington in Human Geography.

The Merciad: Student shares thoughts on talk from director of National Geospatial Agency - Sports editor Bernard Gerwig is the Mercyhurst student in question. He writes, "As for myself, as an Intelligence Studies major, what struck me the most about the event was Robert Cardillo’s repeated focus on positions and careers involving Science, Technology, Engineering and Math, or S.T.E.M. for short."


Geography on the Farm

I was on vacation last week in Iowa and Illinois. I spent several days as an "apprentice farmer" working with the chickens, turkeys, sheep, hogs and (guard) llamas. Two geographic observations:

1) The farm (barn, pens, open space) is a huge geography challenge! You need to carefully manage the doors and gates so the animals don't go where they should not. If you leave the barn's "people door" open by accident when the sheep are not in their pen, they may get into the chicken feed. Ok, well, they did. I clearly hadn't completed my farm mental map.

2) It was Halloween, so my host farm family was planning to take their daughter to a residential area in the next town to trick or treat. But there in rural America there's another option: "Trunk or Treat." Families gather at a local park or venue and the adults offer treats from their car trunks to the costumed kids! The smaller area makes it a bit safer, younger kids can explore on their own, and those with mobility issues have shorter distances to trek between "houses."

I received this correction regarding the Dewey quote I shared last week.


You should not be embarrassed by what you did not know because Dewey did not say this, although he said things that were close to it.

Here are two sources that explore the questionable quotation: