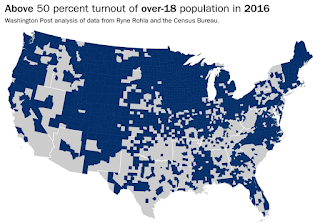 WaPo: Where Americans vote — and where they don’t - A map series, aka "small multiples," to celebrate National Voter Registration Day.

Story Maps: On the Story Maps Resources page, scroll down to a new section titled "If you're an educator."

PBS Newshour: 5 forgotten books about geography and place to read now - I'll toss in my favorite, The Tyranny of Distance How Distance Shaped Australia's History, by Goffrey Blainey.

Press release: UrbanFootprint Launches Offering for Educators and Researchers - I've not heard of the company. "Finally, a cloud-based urban planning software built by urban planners and designers who truly understand your needs. Actionable Data, Scenario Building, and Multi-Metric Analysis. All in one place, accessible from anywhere."

Digital Museum of Planetary Mapping - Browse images by the decade of their creation, the world they depict or the type of data the map displays. The site includes more than 2,200 maps, created over  four centuries and was unveiled at last week's European Planetary Science Congress held in Berlin. Via Space.com.

GIS Jobs Map: Just what it says. Via Reddit/r/GIS.

Dhaka Tribune: Youth makes Bangladesh’s map using soil from 64 dists - "Shuvongkar Paul from the Barangkula village of the Alfadanga upazila and a final year student of the Film and Media Department from Stamford University" built the map. It's not clear from the article exactly why he made it.

NC State: Learning through Play with a City’s Built-in Math - "For an interdisciplinary team at North Carolina State University, guiding students to play with a city’s built-in math could be key to improving STEM learning. With funding from the NC State College of Education, the team is developing a computer game that will encourage students to design virtual cities and, in the process, think critically about the relationships between numbers."

UC Extension: Communicating with Maps (aka cartography) will be taught by @admanfree Oct 11-12 in Davis CA. $750

St. Louis University: Saint Louis University, aiming to become a leading Jesuit research university, sought topics to populate a new research institute, made possible through a $50 million gift to the university. One of the first three areas selected is geospatial; there's a video explaining the vision.

Very Spatial: Dr. Matthew Wilson on University of Kentucky - Says Matt about the podcast: "We discussed my recent book, pressures on geography departments given declining enrollments, ideas around teaching critical mapping, and the often missing accounts of the role of women in the histories of digital mapping and the broader discipline of geography." Via @wilsonism.