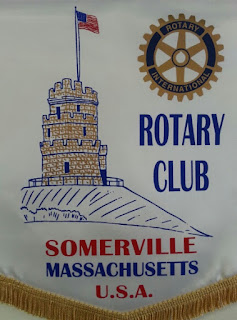 It was a busy spring weekend in Somerville. It was our annual open studios event, the YMCA hosted a bouncy castle and lots of garage sales popped up across the city. By my house a Honk band came down the street leading a parade of supporters for a "fossil free" city. Over at the shopping center, the Somerville Rotary Club was hosting a donation drive at the Star Market. Because someone thought through the paths of shoppers, the drive looked like a booming success.

Before I get to the geography story, I have to point out that the manager of the grocery store is a member of Rotary, so he was instrumental in supporting the drive on a busy Saturday. The team that implemented the drive did their geography homework. The Rotarians noted there are three sliding doors into the large store. There's one main entrance, one main exit and one smaller door that is both an entrance and exit. The organizers set up two teams at tables: one was at the main entrance, which I'd guess captures 70% of the shoppers as it's near the middle of the large parking lot, and the other was inside the store in the middle of the exits of the ten or so check out lanes. The indoor table had helium balloons flying above it.

When I entered the store at the main entrance I was greeted and told about the donation drive. A Rotarian handed me a flyer explaining what sorts of things were needed (food items and health care items) and to what organizations they'd be donated (Project SOUP, Respond, Catholic Charities). I was also told there'd be table at which to drop the donations on the way out.

I looked over the list and picked up a few extra items that were not on my shopping list. After I paid I looked up to see the balloons and was sure that's where I need to go. I handed over a few cans and volunteers quickly sorted them into the large boxes behind the table. They thanked me and offered a small gift. I let them know that their planning had made it very easy to help out. It seems I was not the only one to donate; they already had several full boxes at 12:30 pm.

I wanted to document this effort because so often the flow of foot traffic is not considered in these drives and related efforts.  I am always disappointed when kids or adults are collecting coins on the way in to a store. I think it's far more likely that shoppers will have change in their pockets that they won't miss on the way out of the store. I recall a mis-located Girl Scouts' cookie table; it was in the direct line of one curb cut at the shopping center. That caused traffic back ups for strollers and wheel chairs and tended to focus sales at only the front of the table. Pulling back the table enables a better flow and perhaps could have enabled sales from three side of the table.

I applaud my local Rotarians for realizing that geography matters at this large scale and hope other social service organizations will be as careful as they plan their campaigns.
Posted by Adena Schutzberg
Email ThisBlogThis!Share to TwitterShare to FacebookShare to Pinterest
Labels: flow, rotary, somerville
Newer Post Older Post Home