Teaching the Future of Geospatial Technology

I taught a course called Trends in Geospatial Technology as part of the Penn State MGIS program in 2010 and 2011. My students and I evaluated a variety of software and hardware trends that we thought might be significant as they pursed their careers. I selected most of the topics; the students selected, and lead discussions about, the remaining ones. In 2016, some five years on, I wanted to review the topics we covered and offer a status update on them.

One big question was which type of mobile implementation of location-based solution would win, browser-based ones or dedicated apps?

My sense is that today the pendulum is swaying toward the app. Why? Apps can provide the organization behind the solution with far more data about the user, which is very important when the user is the product. Apps win, even though developing for more than one platform costs more and often mean a multi-part part launch, with the iOS app first, then Android, then maybe Windows and others.

I wanted my students to know something about "current" user interfaces (WIMP: "windows, icons, menus, pointer") and interface design and to look at what was ahead. In 2010 that included touch, body movement detected by sensors (Kinect) and wearables/remotes (Wii). We certainly touch our phones and tablets to manage our lives, but most of us still do our heavy duty geospatial work with WIMPS. I hope we'll see more voice use, especially for data capture, as Cortana, Alexa and Siri mature.

The big revelation in interactive cartography in 2010 for me was that the user interface was in fact part of the map. (Allen Carroll taught me that.) In 2010 and even today, there are few static maps; everything is interactive, for better or worse. I'm pleased to see more of a focus on cartography in publications, academia and events like Esri's recent Cartography Summit. That said, I think a variety of people, including Anthony Robinson who used the phrase, are still looking forward to "a viral map that actually matters."

That was a thing! And, while some continue to back NoSQL for spatial solutions (MarkLogic and Cloudant), it's a niche. These days, for most users, I still see a SQL world. Even last month's state of NoSQL article in ArsTechnica pays spatial little mind.

One of my students selected the federal government's GeoPlatform Initiative and other "working together" efforts as a trend. GeoPlatform itself seems to be "just another" federal effort. One of its original proponents, Gerry Johnston, was GIO of the Department of Interior and now serves as director of the Information and Technology Management Division there. I wonder if he'll mention GeoPlatform in his keynote at FOSS4GNA in Raleigh this spring? As I write this, USDA and Esri have announced the Engagement Portfolio, a series of interactive, story map-like offerings to better explore the Forest Service's data. Could that, and its peers, be the future of government data sharing/visualization?

The key certification five years ago was the GISP. It had been in place seven years and more than 5000 people held the credential. What's new today? The GISP, for new applicants, requires a test. There are also new credentials to collect: badges, a USGIF GEOINT certification and a few more ASPRS certifications related to LiDAR. My sense is whenever the certification comes up in conversations about jobs, there's no firm stance one way or the other. The certifications are out there for those who want to chase them; I rarely see them in job ads or requirements.

The terms volunteering geographic information (VGI) and citizen science pop up in my reading quite a bit. The buzziest non-commercial success is in humanitarian efforts where individuals with an urge to "help" during a natural or manmade disaster can do so. Mapathons, like this one at the AAG conference, are an important way to channel energy and serve others. The commercial success story is Waze. My sense is that as apps that include crowdsourcing gain more traction, the fact that there is crowdsourcing is no longer scary. Perhaps more people are comfortable "being the product." Was there any pushback to this recent crowdsourcing of data to predict dangerous crowding situations? 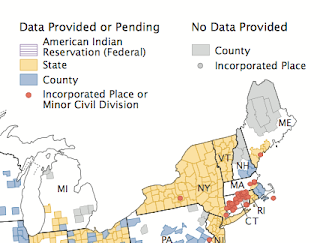 One of my students was a self-described "Census geek" and he helped us explore planned efforts to better collect and share the bureau's geospatial data. Perhaps I'm out of touch, but I've heard nothing about the Geospatial Support System Partner Program (GSS-1) and how data from partners has been integrated into data products or the impact of these on Census data users.

Back in 2010 Esri seemed to lead the charge with cloud computing for geospatial analysis and mapping. It starting introducing key concepts in 2009. Now everyone is doing it and my suspicion is that no one even thinks of it as cloud computing. Is Mapbox cloud computing? CartoDB? What about Amazon offering Esri Server on EC2? I'm going to suggest that at this point if you think someone should be hosting some implementation of geospatial tech in the cloud, they probably are. Cloud computing has matured to a point that its now an invisible part of the geospatial infrastructure.

HTML5 was new and exciting in 2010 - in tech in general and within geospatial areas. Now? Talk of it related to GIS is quite rare (ok, here's one article from last summer). HTML5, like cloud computing, in part of our infrastructure. To be fair, even in the first months of this year there are stories of apps moving from Flash (or another multimedia platform) to HTML5.

My sense is that desktop software licensing has changed little since 2010. Users agree, I'll suggest without reading them, to an End User License Agreement or an open source license.

The significant changes that I see relates to the cloud. While there are both proprietary and open source Web mapping tools and geospatial databases for servers, the trend for many organizations is to tap them via a SAAS provider such as Esri (proprietary software) or CartoDB (open source software). Other enterprise solutions like SAP and Salesforce are pushing geospatial implementations toward their linking software access (licenses) to an identity. The latest desktop mapping tool from Esri, ArcGIS Pro, can tap a pooled license from ArcGIS Online or Portal, a named user from those services or use a license assigned to a specific machine.

In 2010 my students described augmented reality, with its limitations, as "a solution in search of a problem." Most uses were weak marketing efforts or simple games. Today we are getting closer, but the big play for information at the right place and time, the locational implementation, has yet to arrive. The latest news related to augmented reality and geospatial that I found? Toyota's patent on an augmented reality windshield that updates the data as the car moves.

Geospatial standards, in particular software interface standards and data encoding standards, are not sexy. And, like many other standards such as RSS, they are slowly being pushed deeper inside the tools we use. Things just work; there's no need to know why... until they break or don't live up to our interoperability dreams.

GPS has been the "king" of location determination since selective available disappeared in 2000. Then came A-GPS, Wi-Fi and a host of base station solutions. There are also a number of clever ways of using existing combinations of electromagnetic spectrum to create a map against which to locate a device. I thought Rosum, which planned to use TV signals, to do that would be great. It never really saw the light of day. Today iBeacon, which a protocol for another base station solution, gets a lot of buzz, but that's because it bear Apple's name and marketing cache. And, just this week a new location determination solution appeared which uses just one Wi-Fi access point to locate a device within tens of centimeters.

We have a quite a few location determination tools but we've yet to do much with them. See LBS below.

Every child can manage a tablet - and they do. But, is the tablet's big screen being used in GIS? Is it the new personal navigation device? The new GIS teaching tool? The new platform of choice? I have seen no evidence of heavy tablet use in our field.

Python was the new kid on the GIS programming block in 2010. JavaScript was hot, too. Now I see Ruby a bit more. But, the reality is that programming languages will come and go. My sense is that it's valuable to learn to program and also to learn to evaluate and then use the right tool for the job. Are students taught that in computer science? In GIS programming courses?

LiDAR is mainstream now. It's got its own magazine and there are several formats in which to store and use it. It's even got its own ASPRS certification! It's another data type about which students need to learn. Equally important, they need to know about its possible uses, which seem to expand pretty regularly.

Location based services were hot in 2010 and every subsequent year was expected to be the Year of LBS. Now it's quieter. because providers and users are still trying to find killer applications. When was the last time you used Foursquare or Swarm? I'm going to guess you used location determination more recently to call an Uber or track the bus coming to a nearby stop. Could those be the killer apps for location-based services?
Posted by Adena Schutzberg
Email ThisBlogThis!Share to TwitterShare to FacebookShare to Pinterest
Labels: geospatial, psu, trends
Newer Post Older Post Home